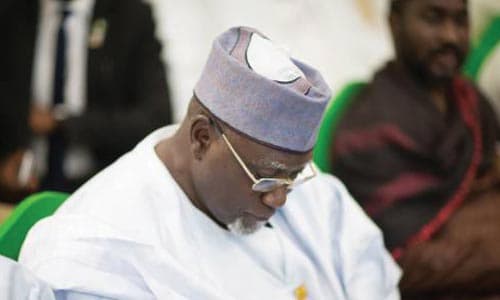 The viral video of an alleged discovery of huge sums of money with the sacked director general of the Department of Security Services (DSS), Lawal Daura and the subsequent call for his investigation, have continued to raise questions.

Experts however seem to favour covert investigation in order not to endanger national security.

Naija News recalls that the DSS has also denied the viral video, stating that it was a fake video, but  the news had already gone viral hours after it went off.

A guardian reporter who spoke to experts on law and security explains that there have been such discoveries in the past and nothing seems to have happened thereafter. Also, it seems government institutions are very good in denying damaging allegations even in the most obvious circumstances, possibly to mitigate institutional damage.

A security expert and Chairman Transworld Security, Mr. Ona Ekhumo reacting over the issue, said agencies should be held accountable for not producing useful intelligence for Nigeria more than anything else.

According to him, the budget of the secret services is not openly scrutinized.  “There is something called politics and there is another called governance. Often times, we mix them up because of ignorance and because we are not well read. Even those who are well read play on the ignorance of everyone. The secret services are not overt service and have a way of doing things. They are not like the Police. Even in Police, they have secret departments like the E-department, which translated into DSS we have now,” he said.

He continued,  “Even in Britain, the E-department budget, you do not go into because they know what they are doing at the back end. But because of corruption here, government wants to look at their budget. For instance the money that was seized at Ikoyi apartment was an illegal seizure because they were meant for intelligence operations. Nigerians say we need intelligence but they don’t know that intelligence costs money.

“Of course, the agencies could be investigated, but it should not be made public. When the investigation of the Ikoyi money was done by the vice president, it was done secretly and the report as of now is still secret. That is the way you investigate expenditure of security agencies. We should hold intelligence agencies accountable for not producing useful intelligence for the country and fire their bosses.” We don’t need to wait for them to invade the national assembly before firing them, he stated, adding that because we are not doing that, we are condoning ineptitude and mediocrity.

A senior advocate of Nigeria, Ibrahim Bawa believes that the investigators engaged in scrutinizing secret services are trained on how best to carry the assignment. “They know the implication of security information. As far as accountability is what is being referred to, nobody will say security agencies should not be accountable. If it is about accountability, it would be judged on the peculiar situation of every details.

“The investigators are those who are knowledgeable in security matters. So they must know the security implication of every comment they will make and every action they are going to take.”So I believe that security agencies should be accountable for their expenditures and if they are, what is the yardstick for the accountability?” He asked.

According to him, the legislators failed in their duty to serve as watchdog, hence before crisis, it ought to know how the secret agencies are spending public funds.

“The national assembly is empowered to carry out oversight function on the expenditures of MDAs and government agencies. If they had carried out their job, there will be no need to set up an investigation team against the expenditure of any security outfit.

“When we collectively decide to obey the rule of law and the principle of separation of powers, everything will fall in place. But as it is today, democracy is a work in progress in Nigeria. We are just starting and we are coming from the background of military mentality.”So it left for Nigerians, he said to decide whether we want democracy or authoritarian government. If we want democracy, stated, the three arms of government must be allowed to operate unfettered without one arm breathing down the neck of the other.

In the same vein, Lagos lawyer, Chief Michael Agbamuche said the whole essence of security agencies is to maintain a level of secrecy. “You cannot expose their activities to the world at large. Even enemy countries surround us. They are francophone nations. So we cannot expose our security intelligence because they will want to know how much we have been spending on security.

According to him, they should be investigated but in a classified manner. “In England, they set up special committee to do the investigation and report their findings directly to the Prime Minister. It is not made open. “So the activities of the NIA and the DSS should not be made public. In my view, it is better to stay with the opposition accusing the ruling party of cover up than to expose and endanger our national security. Why will the government cover up such action, because it is even a threat to them too,” he reasoned.He stated that security agencies could in similar manner take over the seat of government one day with masked men, adding that any other arm of government could be the next victim if they are allowed to so operate unchecked.

Abuja based lawyer, Abubakar Sani was more emphatic in his position. According to him, the security agencies should be investigated. His words: “If you let our people know they are above the law, they will ride roughshod over all. Look at what Lawal Daura did! The thing is that such investigation should be undertaking but the report classified. It should be reported only to the presidency.

“But if it eventually leaks, there is nothing we can do because that is the error in human system. Under the constitution and the Supreme court has said it, the president is not above investigation. It is only that the president cannot be prosecuted.

“Nobody is above the law in terms of investigation. Whether DSS or NIA, they must all be investigated. They cannot be above the law. That is how they have been embezzling our money anyhow. Therefore, they should be thoroughly investigated. Even the security information we are talking about, there some people within them that are agents of foreign countries like America, who has been making huge money by leaking security information to them. If not, how do America and Britain get security secrets in Nigeria? Nobody is above investigation.”

However in his opinion, Abdulaziz Ogbui, a lawyer said nothing stops any investigation against them. “

He said, I don’t think it would jeopardise any national security if it is done in camera. I believe that if there are some corruption tendencies which government has found out, nothing stops it from investigating them.

He cited example of America, saying “in America, Obama authorised the investigation of CIA, which resulted in the closing down of Guantanamo Bay detention camp. Corruption kills a nation. So it doesn’t matter at what level that corruption is operating, even it is operating within the caucus of the army, nothing stops it from being investigated,” he stated, adding that if the report is exposed, it will not cause much damage so far it is for public good.

“There is no longer anything that is too secret in the world now, if it is not a Gestapo nation. So I don’t think it will endanger national security to investigate security agencies,” he noted.

READ ALSO  Abaribe Questions His Arrest By DSS, Says He Will Not Be Cowed Into Silence