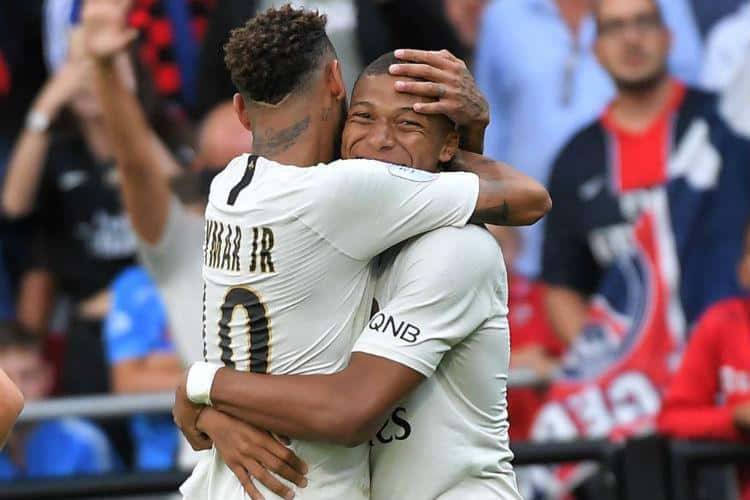 Paris Saint-Germain needed only 45 minutes to win the Guingamp and take provisional lead of the French Championship. This Saturday, after a first stage below the criticism and the disadvantage on the scoreboard, PSG returned from the interval with a posture worthy of the starring cast and with Mbappé on the field managed not only the turn, but the score of 3 to 1. Of penalty Neymar left his. The young Frenchman has scored two goals.

The first time PSG was to forget and erase from memory. Without ambition, the team led by Thomas Tuchel and led by Neymar did not have a sure finish even in 49 minutes. The Brazilian, incidentally, had an erased step, getting stuck on the left side of the field, where he created little. Guingamp took advantage of the drowsiness of the rival, opened the scoring with Roux and scored the second, but canceled by the VAR for lack in the origin of the move.

In the second stage, the PSG returned from the interval with Mbappé and the young man was responsible to lead the turn. Before that, however, Neymar, more efficient and present on the field, suffered and converted the penalty to equalize. Then came the ground of the French seven shirt, which marked the second, the third and gave final numbers the match: 3 to 1.

Who expected the full dominance of Paris Saint-Germain throughout the first half saw this in just the first five minutes. With the ball at the feet of the post, Thomas Tuchel’s team was struggling to make it 5-1. On the other side, the Guingamp took advantage of the counterattacks, but missed the target.

Gradually, seeing the lack of effectiveness of the PSG, the Guingamp started to climb the lines and press the ball out of Parisians, but still with the counterattacks as the most lethal weapon. It was 1 – 0 at the break. Thuram made a great move on the left side and crossed to Roux, who in the small area filled his foot for a spectacular Buffon defense. The ball still exploded on the crossbar before leaving.

Paris Saint-Germain’s responses were on the right side of the pitch, with Di MAria, which made Neymar’s performance off. Alone on the right flank, the Brazilian participated little and took the initiative to move more through the middle, starting offensive moves.

However, the shirt 10 saw Guingamp not only open the scoring but make the second, which in the end was canceled. First, in the 19th minute, Dagba was wrong to receive the ball on the left side and delivered it for free to Coco. The attacker took the Paris defense in disarray and fired off into the goal. Before finishing, it saw Roux of the side and rolled for the forward, that just moved Buffon and opened the scoreboard.

The second goal of the Guingamp, which ended nullified, was Benezet. At 24, a counterattack left Thuram alone and Buffon desperate. The goalkeeper barely missed the goal and saw the attacking midfielder cross to Benezet, who swallowed the net. Then, the referee went to the VAR to review the bid and finished, after four minutes, confirming a foul in the origin of the move.

The interval did well to PSG, who returned to the second half with a completely different stance of the first 45 minutes. Soon in the first bid, Di María tested the goalkeeper Johsson, who made his first defense in the match. After five minutes, it was the turn of Neymar to be knocked over and the lime was pointed by the referee. In the charge of the penalty, the Brazilian showed a lot of category and left everything the same.

The tie began to look satisfactory to Guingamp, who abdicated the game, gave the ball to PSG and came to defend themselves. With a lot of movement in the attack, the Paris team well tried, but little managed to scare the goalkeeper Johsson. Paris Saint-Germain’s first threat of more danger in the second half came only in the 33rd minute when Neymar cornered and Di María dodged the first post. The ball, however, exploded on the beam before leaving.

It was up to the young world champion, Kylian Mbappé, to score the goal of PSG’s turn. In the 36th minute, when the team began to squeeze the pressure on the goal, the seven shirt received a great pass from Di María, showed a lot of tranquility and shifted goalkeeper Johnsson. However, the final act of the young man who came in the 46th minute when he received from Neymar lacked the final touch and fumbled the net: 3 to 1.