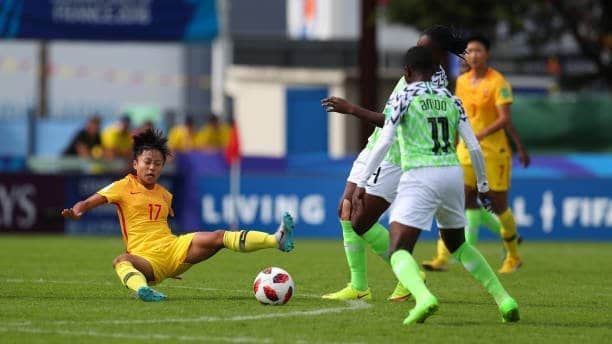 captain Rasheedat Ajibade goal during the last minutes of the game was the saving grace needed by the Nigerian team to advance to the quarter-finals of the ongoing FIFA U-20 Women’s World Cup France 2018 from Group D.

The Chinese women came all out as they tormented the Super Falconets defence during the first half at the Stade du Clos Gastel.

Mengyu Shen had the first chance of the match in the 25th minute when she hit the Nigeria crossbar. A few minutes later, captain Linlin Wang headed over the target from close range.

The diminutive Linyan Zhang help give China the lead four minutes before half-time as she turned her Nigerian marker in the box and stroked the ball past a diving Chiamaka Nnadozie to give the Asians the lead at the break.

The Super Falconets pushed hard in search of an equaliser in the second half, but found the China backline and goalkeeper Huan Xu in resilient form until the end of the contest.

Ajibade sealed the quarterfinal place for the Super Falconets after she swiftly and judiciously pulled Aishat Bello’s 95th minutes cross at the near post into the back of the net of the Chinese.

The Nigerian women will feature in the quarter-final fixture against Spain on Thursday 16th August.