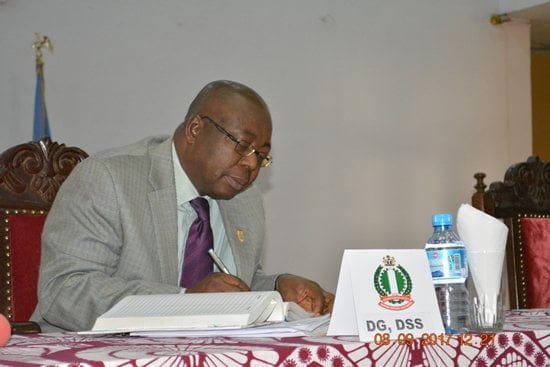 The Department of State Services (DSS) has assured that it will reexamine the cases of illegal detention especially in the case of the former National Security Adviser (NSA), Col. Mohammed Sambo Dasuki (rtd) and other related human rights violations allegedly carried out by the agency.

Mr. Mathew Seiyefa, the new acting DG of the agency, during the maiden media interaction of the agency in Abuja stated that the agency will likely appoint a spokesman in order to facilitate a smooth working relationship with the Media and members of the public.

Although he did not say when Dasuki would be released, Seyifa assured that all cases of illegal arrests and detentions by the agency were being reviewed to ensure that no Nigerian was unduly detained.

“I am being briefed on the issue of Dasuki. I will be able to make a statement on it after being properly briefed.

“In the coming days we will review all situations, particularly as relating to DSS and other agencies working together to promote national security.” Seiyefa said.

The Acting DG also assured that the agency will be reorganised to ensure that it protect the interest of the country and also shun any form of sectionalism, ethnicity, favouritism and corruption.

“Nigeria comes first; the peace and security of this nation come first. That is why we are in business and if not, we will not be.

“It’s in our collective and enlightened self-interest too to protect our people and execute our mandate within the tenets of the law.” he added.

He assured further that the protection of the right of every Nigerian will be promoted and protected by the agency.

The DSS boss also promised that the service would continue to partner with the police, military, as well as other relevant agencies to ensure the nation’s security.

He warned that while the DSS would ensure its best to protect the rights of the citizens, it would not tolerate the abuse of freedom of speech by any person.

Naija News recall that Acting DSS DG was appointed immediately after the  sacking of the ex DG of the DSS Mr. Lawal Daura by Acting President Yemi Osinbajo.

Daura’s appointment was terminated following the blockade of the National Assembly complex in Abuja by DSS operative, preventing lawmakers and others from entering the premises.