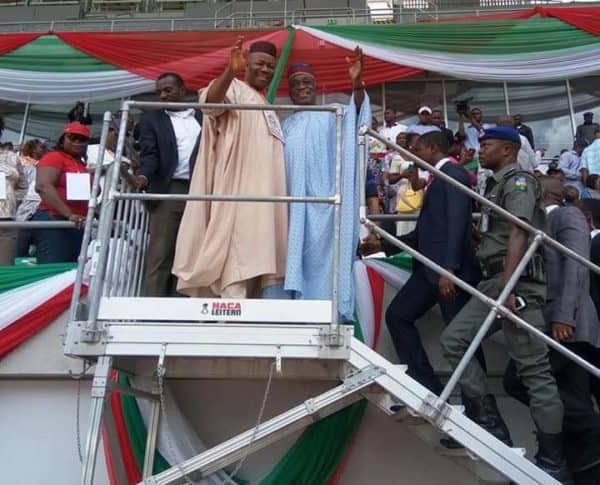 Lawan Describes Akpabio’s Defection As A Plus For APC

The defection of Godswill Akpabio from the Peoples Democratic Party (PDP) to the All Progressives Congress (APC)  has “swallowed” the recent defections from the ruling party.

Ahmad Lawan, senate majority leader made this ascertion even as he welcomed the former governor of Akwa Ibom state into the APC.

Lawan who spoke at the APC Mega rally in Akwa Ibom yesterday, described the former governor of Akwa Ibom state is an “uncommon senator” who enjoys support all over the country.

Naija News recalls that the ruling party recently lost some of its senators including Senate President Bukola Saraki to the PDP.

He said “Senator Akpabio’s defection has swallowed all the others. It is one that is equal to more than 14 others,” he said.

“This uncommon senator is a nationalist who believes in a united Nigeria; in a stable Nigeria and in the administration of Muhammadu Buhari. He believes that Nigerians should support this very good and noble cause.

He noted that as a minority leader, Akpabio offered constructive criticism while in the PDP.

According to him, “I used to refer to him as the minority leader, I never call him opposition leader because he has always been considerate as minority leader, as someone who should be opposing government.

“He has always considered the national interest first. And therefore, what he did was meaningful opposition to what we do in this country. He is always conscious of the fact that we need stability and unity.”