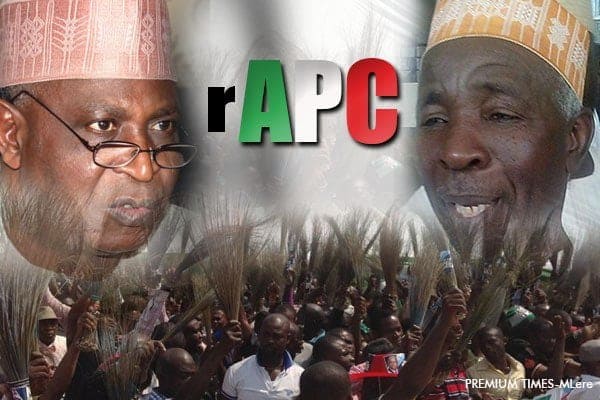 The rumor of the alleged impeachment of Saraki came even as the Senate President defected from APC to the Peoples Democratic Party (PDP), some lawmakers raised the alarm that APC plans to remove the senate president “through the back door”.

Lai Mohammed, minister of information, had dismissed the plot to remove Saraki as an allegation without proof,

But Kassim Afegbua, R-APC’s spokesman, said the APC leadership is conspiring with Abubakar Malami, attorney-general of the federation and Boss Mustapha, secretary to the government of the federation, on the issue.

“We can bring you news that the disputed leadership of the APC, working in cahoot with the Attorney General and Minister of Justice coupled with the Secretary to the Government of the Federation have perfected their plans to apply gestapo methods to forcefully unseat the Senate President,” read a statement signed by Afegbua on Sunday.

“A high-powered meeting of these persons was held at the Maitama residence of the disputed chairman of the APC on Thursday, 2nd August, 2018 where they brainstormed on the possible ways to carry out their illegality. The meeting which lasted for three hours, insider source confirmed to us at the R-APC, explored both legal and illegal approach to execute the assignment of ensuring that Dr. Bukola Saraki ceases to be the senate president.

“Having met a brickwall going by the legal processes involved before the senate can be re-opened, the disputed APC leadership is toiling with the barbaric idea of forcefully opening the national assembly, reconvene the senate and use the senators of the APC to preside over the planned impeachment. Senator Abdullahi Adamu has been penciled down to succeed distinguished senator Bukola Saraki, amidst a host of other changes in the senate’s principal officers. Once the senate leadership is overthrown in a coup d’etat manner, the senate will immediately consider the virement budget of the INEC and also approves the pending nominations in the senate. Part of the plot was to reach out to some PDP senators especially those who have EFCC queries in order to give them a clean bill of health once they defect to the APC. They also agreed to woo some senators with the sum of fifty million naira each (N50m).

“We find all these plots as burdensome for a system that was already undergoing storm and stress, thus making us object of ridicule in the eyes of the world. It is benumbing to note that those who usually occupy the front seats when democracy is being discussed, are the architects of these orchestrated plots peculiar with military regimes. Even when we understand that they could be carry-over effects of military regime, we never knew they have assumed this frightening dimension.”

The APC  also added that President Muhammadu Buhari’s vacation to London is part of the calculated plot to kick out Saraki.

“It is not an accident of history that each time the president travels for medical attention, something dramatic often takes place. And this present trip, we believe, will unfurl already plotted schemes aimed at removing senate president, Benue state governor, and other perceived persons opposed to the re-election of Mr. President,” Afegbua said.