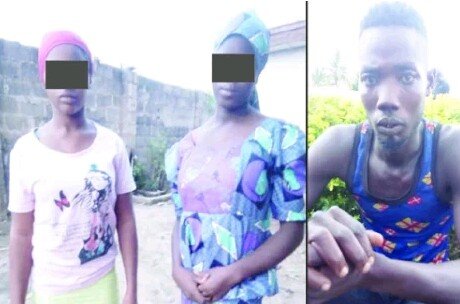 Shamsudeen with accomplices, reportedly kidnapped the two 16 year old on April 28, 2018, from Gwada in Shiroro Local Government Area of the state and subsequently moved them to Suleja where they were forcefully converted to Islam preparatory to their being given out in marriage by the leader of an Islamic group, Association for the Enhancement of Muslim Welfare, Habib Madaki, at Victory Road, Suleja.

Okwudiri and Miracle whose names had been changed to ‘Khadijat’ regained freedom from the Islamic group at about 9 p.m. Sunday night and thereafter were handed over to the Igbo community leader in Niger State, Eze Pampas Ngozi Wahiwe, on Tuesday evening, July 31, 2018.

According to Abubarkar, “Police detectives attached to Anti-kidnapping Squad arrested one Shamsudeen Bashiru of Dawaki Angwan Jekada Suleja for abducting Okwudiri 16 years and Khadijat 16 years of Gwada in Shiroro Local Government Area, the case under investigation.”

The report stated that during the ‘doctored’ parade, journalists were denied access to Miracle and Okwudiri when they were brought out from the command’s cell, while the hijab (Moslem women’s wear) they were adorned with were removed and withheld by the police.

Journalists also observed that none of the leaders of the Association for the Enhancement of Muslim Welfare, Suleja in whose custody Miracle and Okwudiri had been kept without the knowledge and consent of their parents for almost four months were paraded.

It was also reported that the Secretary of the group, Bashir who initially refused to release Miracle and Okwudiri to their guardian, Mr. Ndubuisi Sunday when he visited their enclave in Suleja was sighted at the command headquarters, Minna, while other criminal suspects were being paraded.