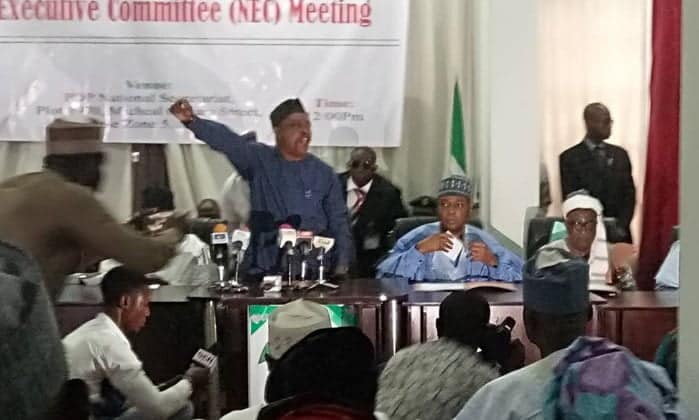 We are aware of plots already perfected in a meeting, on Wednesday night, between the @NGRPresident and some compromised @APCNigeria senators, who are now in the minority, to forcefully reconvene the Senate with protection from security agencies, with a view to impeach @NGRSenate pic.twitter.com/llTTZb4O6X 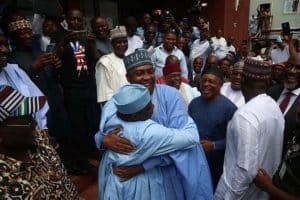 Naija News learnt that the NEC meeting attended by the four former members of the All Progressives Congress (APC) was in a celebration mood as the politicians exchanged banters.
Apart from the former  APC chiefs, the meeting hall had key figures in the PDP, including governors, lawmakers and some of the presidential aspirants.
One of the highlights of the NEC meeting is the symbolic recognition of Senate President Saraki as the leader of the opposition party being the highest ranking political office holder under the present dispensation.

Saraki will replace his deputy, Senator Ike Ekwerenmadu, who held the position until the defection of Saraki and other top APC members to the PDP.
The arrival of Saraki was heralded by loud ovation as he was led into the venue of the meeting by PDP national chairman, Prince Uche Secondus, and other top leaders of the party.

Saraki arrived at about 2.50pm and was received by a tumultuous crowd that besieged the national secretariat of the PDP in Abuja.