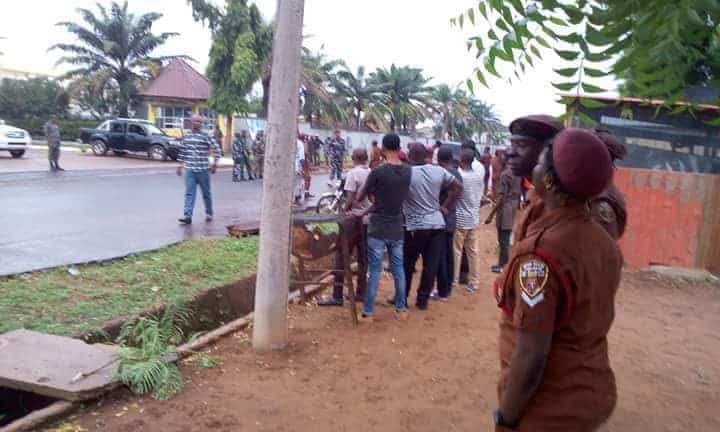 Heavily armed security operatives have have besieged the Benue State house of Assembly, blocking the entrance into the complex and preventing workers from gaining entrance, Naija News learnt.

The reason for the presence of the armed security team is still unfolding but reports from several sources have it that the action is part of moves to reinstate the sacked Speaker, Rt Hon Terkimbi Ikyange, as well as impeach Samuel Ortom as governor of Benue state.

Bemgba Iortyom, State Publicity Secretary of the PDP, claimed that the invasion was sponsored by the APC in the state, under the leadership of Senator representing Benue North-West Senatorial District, George Akume.

According to Iortyom, “The move, if carried out, will be in defiance of a prevailing Makurdi High Court order restraining the impeached Speaker and other impeached principal officers from parading themselves as such pending the determination of the substantive matter brought before it by 22 members of the State Assembly.

“The court had also ordered the police who had a few days back occupied the State Assembly complex to vacate the premises.

“The information at our disposal further availed that Police authorities in Abuja have already deployed a detachment from Benue and Nasarawa states to enforce the illegality being planned by APC and the detachment, in the course of last night, took over the premises of the Assembly preparatory to the execution of the plot.

“Senator Akume is believed to have perfected this plot with a fellow APCleader, in the person of Nasarawa State Governor, Tanko Almakura, when he (Akume) visited the governor a few days back.

“The objective of this plot, we have been further informed, is to reinstate impeached Speaker, Ikyange, who we also learnt is under brief to commence impeachment proceedings against Gov. Ortom, as soon as he is reinstated, this being a counter-offensive move of Senator Akume in his ongoing feud with the Benue governor.

“It is a matter for deep concern that remnants of the APC in Benue, fearing the imminent total collapse of the party, should resort to such nefarious schemes as this evil plot, which if carried out, will represent a most brazen assault on the institution of democracy as well as threaten the fragile peace and security in the state.

“We therefore, call on Benue citizens to rise up in total rejection of the option of ‘jack-boot democracy’ which Senator Akume and APC, with the help of the Abuja powers, are desperately seeking to impose on Benue, as monumental defeat at the 2019 elections stare them in the face.

“APC must abide by the tenets of the principle of rule of law, particularly now heading into the 2019 elections, this being the only option by which our democratic culture will be nourished and institutions of state further strengthened as was exemplified by PDP in the 2015 election year.

“Nigeria and indeed Benue State belong to us all, and must be placed at all times above the narrowed self-serving interests of a few individuals who have wasted countless opportunities given them to provide leadership to the people, and have found themselves now in the pitiable status of pariah.”

Meanwhile, Naija News recall that the State Governor, Samuel Ortom amidst reports of power tussle between himself and Senator George Akume, had defected from the All progressive Congress to the Peoples Democratic Party.