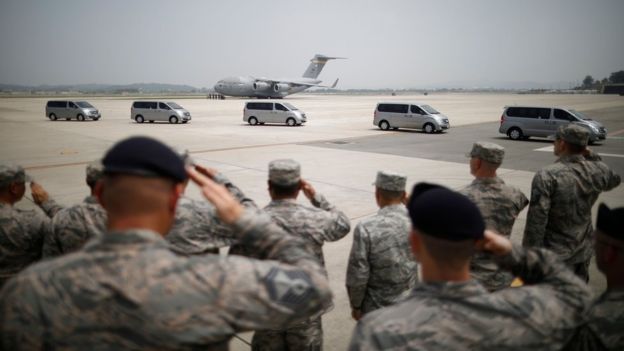 US soldiers salute to vehicles transporting the remains (Source: BBC)

The remains of the missing soldiers since 1950 to 1953 war in Korea was seen as a modest diplomatic coup for President Trump as this was one of the agreements reached when he met with KN.Korea’ President Kim Jong Un in Singapore where they discussed primarily on securing the denuclearization of the North.

“After so many years, this will be a great moment for so many families. Thank you to Kim Jong Un,” Trump wrote on Twitter.

A White House statement earlier said: “We are encouraged by North Korea’s actions and the momentum for positive change.”

The White House in a statement said a U.S. military transport plane flew to an airfield in North Korea’s northeastern city of Wonsan to bring the remains to Osan air base in South Korea.

Soldiers in dress uniforms with white gloves were seen slowly carrying 55 small cases covered with the blue-and-white U.N. insignia, placing them one by one into silver vans waiting on the tarmac in Osan.