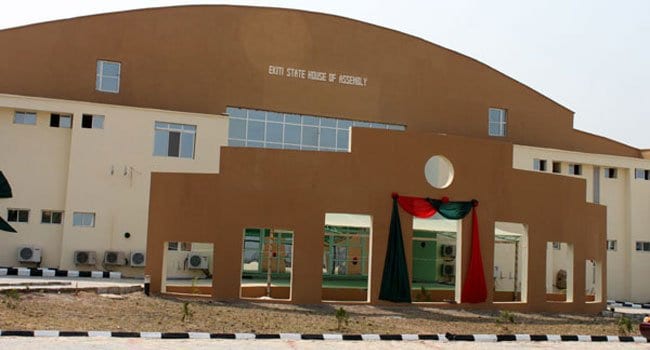 Speaker and the State Police are at Loggerheads over deployment of security operatives to the Ekiti state House of Assembly complex.

While the police pointed out Today that they were only providing security for lawmakers and staff members of the assembly, the Speaker of the Assembly, Kolawole Oluwawole, has alleged that the move was borne out of the plan to seize the authority of the legislature to create mischief and destabilise the state.

Naija News recalls that the Assembly had shortly after the July 14 governorship election adjourned sitting until October, after condemning the outcome of the election.

However, three of the house members, who are of the All Progressives Congress, rejected the adjournment and called on the security agencies to provide them with security as they were prepared to continue their legislative duties.

Mr Oluwawole claimed in a statement Today that the police “invaded” the assembly complex late Wednesday night on the orders of the Commissioner of Police, Bello Ahmed.

According to the speaker, the police commissioner had claimed that he received a letter from the Clerk of the House, Tola Esan, purportedly seeking security deployment in the premises of the House.

He said Mr Esan had written to the commissioner of police, dissociating himself from any letter and describing such letter as forged.

He said the clerk of the house also spoke with journalists on camera, stating categorically that he did not write any letter to the police seeking deployment of security officials and that the Assembly is on recess till October 8.

“The question we now wish to ask the commissioner of police is; who wrote the purported letter and where did he get it from?” queried Mr Oluwawole.

“Also, we wish to ask the commissioner of police the motives behind his hurried deployment of armed policemen to the House of Assembly complex without seeking clarification from the speaker.

“Again, after speaking with the clerk on phone and he told the CP expressly that no such letter was authored by him, why are the policemen still laying siege on the House of Assembly?”

Mr Oluwawole further noted that the House of Assembly is constitutionally backed to go on recess as seen in the National Assembly and other advanced democracies of the world, adding that no official function of the house could take place while on recess.

“We are also aware of the sinister plot to break into the assembly complex before daybreak with the intention of making away with the mace.

“We therefore call the attention of well-meaning Nigerians to the fresh coup being plotted by some anti-democratic agents in the APC in collaboration with the Police in Ekiti State.

“Staff of the House of Assembly have also been directed to stay at home until further notice in view of the need to prevent injuries and loss of lives as the armed policemen can as usual be overzealous.”

But the Ekiti State Police Command has justified the deployment of armed police officers in the premises of Ekiti State House of Assembly, saying it did so to guarantee safety of the lawmakers and staff of the House.

The Police Public Relations Officer of the command, Caleb Ikechukwu, said in Ado Ekiti on Thursday, said there was nothing wrong with the deployment.

“Anytime you see the deployment of policemen, it is to ensure the safety and the security of that place and the people there,” he said.

According to Mr Ikechukwu, there was no need for people to be curious about the deployment of security officials whose duty was to secure lives and property.

“Anytime you see us doing deployment, it’s for a reason; it is to ensure safety of that place at a given time,” he noted.

“That means there must be information which we are working with. And that shows how proactive the Nigeria Police Force is.”

Asked to speak on the alleged letter written to seek the deployment, Mr Okechukwu said: “Are you now meddling into our internal affairs? Anybody that disclosed that information is disclosing a secret information and that person should be arrested and prosecuted.”