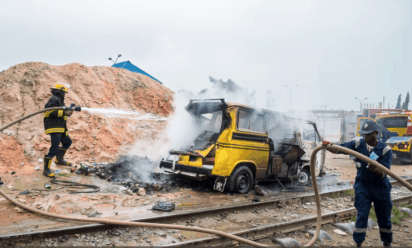 Two male Adult have been confirmed dead by the Lagos State Emergency Management Agency (LASEMA) when a train hit a commercial bus, at Pen Cinema in Agege, Lagos.

In a statement made available to Naija News, Mr Adesina Tiamiyu, the Director General of LASEMA, disclosed that the agency received a distress call at 8.57a.m via the emergency toll free number.

The call according to Tiamiyu was about a passenger train that rammed into a parked commercial bus.

The DG said that the incident made three of the passengers hanging onto the train to fall off the moving train.

”Unfortunately, two adult male lost their lives and were taken to the mortuary by the State Environmental Health Monitoring Unit (SHEMU).

According to him, the Nigeria Police force (Railway Police Division), the Lagos State Ambulance Service (LASAMBUS) and the Lagos State Traffic Management Authority (LASTMA), were the agencies that arrived at the scene to see to the situation.

Tiamiyu admonished passengers to adhere to safety roles and measures put in place before boarding a train.

He also urged residents to desist from hanging on a moving train to avoid unnecessary loss of lives in the state.