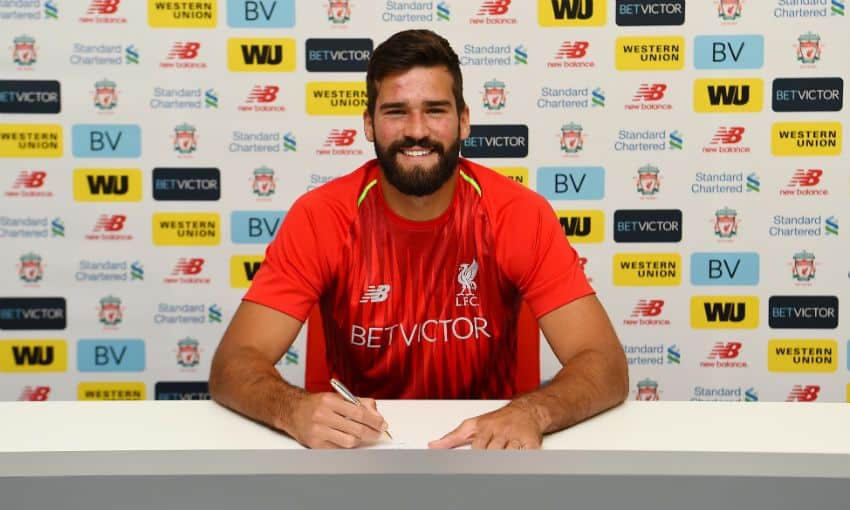 Brazilian goalkeeper, Alisson Becker, has completed a £65million (€73m/$85m) move from Roma to Liverpool on a six-year deal.

The move makes the 25-year old the most expensive goalkeeper in history.

He joins Naby Keita, Fabinho and Xherdan Shaqiri as summer arrivals to Merseyside.

Speaking with Liverpool’s website after completing his move, Alisson said: “I’m really happy, it’s a dream come true to wear such a prestigious shirt for a club of this size that is used to always winning.

“In terms of my life and my career, it’s a huge step for me being part of this club and this family.

“You can be certain that I’ll give my all.”

Liverpool manager Jurgen Klopp, also expressed his delight on the capture of a new goal keeper.

“At one point in the last few weeks it came up, the opportunity to sign one of the world’s best goalkeepers – then it’s not a long thought, to be honest, it’s only that you need to have a little talk with the owners!” Klopp told the club’s website. “They were quite excited, so we did it.”

“It shows the value of goalkeepers, of course, in this moment. It will happen a lot in the next few weeks I guess and that’s it, so we are really happy to have him here now.”

Liverpool open their 2018/2019 Premier League campaign on August 12 with a home game against West Ham.