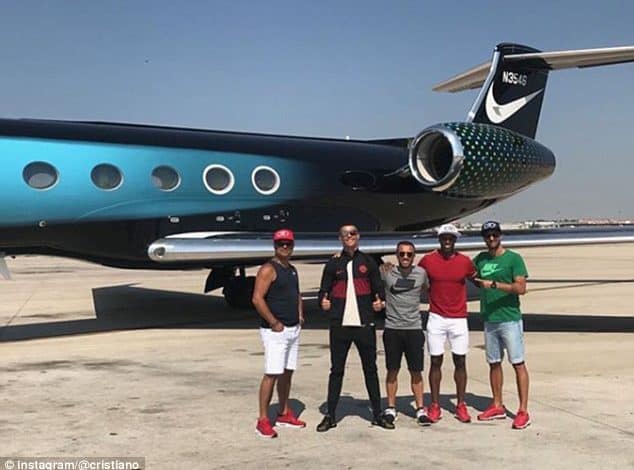 Cristiano Ronaldo, Juventus new signing and Portugal international, has jetted off to China in style to observe his Annual CR7 tour.

Ronaldo made a frequent event of his CR7 tour in recent years, travelling to Asia to meet his global fans and further expand his brand.

The football sensation took to instagram to inform his chinese fans that he is on his way, after a few days of completing his £100million move to Italian side Juventus.

Ronaldo, who was in high spirits while preparing for yet another adventure, posed with his entourage in front of a plush, Nike-branded jet.

The 33-year-old is set to be in for a hectic summer with sponsorship commitments before finally getting down to some pre-season training with his new club.

The forward had to cut short a family holiday to Greece, which he had been taking following Portugal’s exit from the World Cup, in order to seal his transfer.

After his summer, Ronaldo would make his first appearance for Juventus on the first weekend of the Serie season.

The fixtures for the Italian top flight are to be announced on Friday, where Ronaldo will learn who are set to be his first opponents.