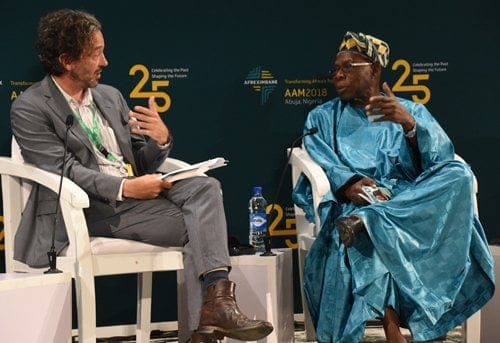 Pic.21. Former President Olusegun Obasanjo (R) speaking during a forum on African Development Finance InstitutionsInsights from a Founding Father, at the on-going Afreximbank Annual Meeting in Abuja on Friday (13/7/18). With him is the moderator, William Wallis, Lead Writer from Financial Times.

Chief Olusegun Obasanjo, Former President of Nigeria, has recommended that for the African Continent to experience economic development, strong leadership is needed.

Obasanjo made this known on Friday in Abuja at the ongoing 2018 Afreximbank Annual Meetings.

According to him, Africa is living below its expectation, despite having the human, mineral, and capital resources as well as strong institutions to become a “heaven on earth,”

“We are not where we should be, but we have moved away from where we were.

“It is obvious from what we have started to see with the signing of the African Continental Free Trade Agreement (AfCFTA).

“The signing of the AfCFTA is historic and it shows that at last Africans are beginning to work together.

“The talk of establishing the AfCFTA has been there since the African Union was established. Imagine how long it took for it to become a reality.

“I remember what happened in Kigali, a day before the signing.

“We were not sure if 20 countries would sign; so it was a surprise when 44 countries signed that day,” he said.

Obasanjo, also, urge African leaders to work together for the betterment of the continent.

He urged further that African Leaders should take a cue from countries that were doing well and also learn not to make the same mistakes that had already been made by others.

Obasanjo, who pointed out that the African population was rising at an astronomical rate, said that it was imperative to ensure that the right policies were made to improve the economy and create jobs.

Obasanjo pointed to the Telecommunication sector in Nigeria as a point of reference as to how African country can make things work for them.

The former president called on Nigerian women to go into politics and vie for, especially gubernatorial and senatorial seats in the coming elections in Nigeria.