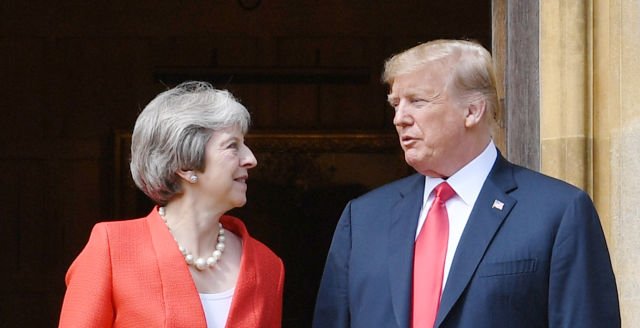 President Donald Trump of the United States has said the United Kingdom would “probably not” get a trade deal with America, if Theresay May’s Brexit plan goes ahead.

He told The Sun that May’s plan would “probably kill the deal” as it would mean the U.S “would be dealing with the European Union” instead of with the UK.

Downing Street has not yet reacted to Mr. Trump’s remarks, the BBC reports.

Meanwhile the British Prime Minister has been making the case for a U.S free trade deal with Mr. Trump, on his first UK visit as president.

She said Brexit was an “unprecedented opportunity” to create growth in the UK and U.S.

Mr. Trump also said former Foreign Secretary, Boris Johnson – who disagrees with May on Brexit and resigned this week – would make a “great prime minister,” adding “I think he’s got what it takes.”

In his interview, he also renewed his criticism of London Mayor Sadiq Khan over last year’s terror attacks in London, saying he had done “a terrible job.”

It comes ahead of a day of planned and widespread, anti-Trump protests across the UK, including one in Parliament Square which involves a giant inflatable of Mr. Trump as a baby.