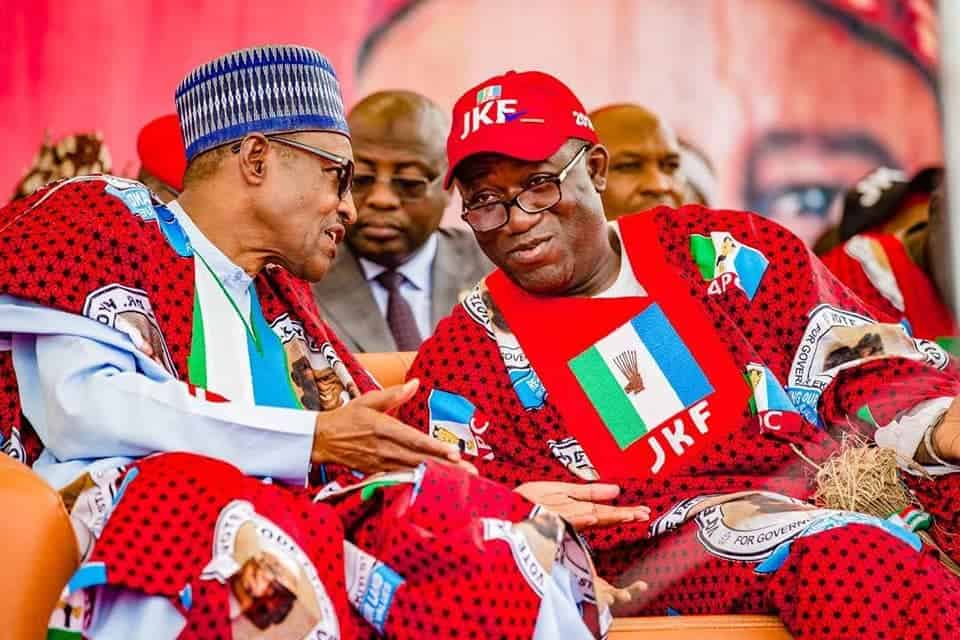 APC Rally Is A Mockery Of Fayemi And Buhari, PDP Says

The Peoples Democratic Party (PDP) berated the presence of President Muhammadu Buhari at the All Progressives Congress (APC) mega rally in Ekiti State yesterday, claiming it worsened matters for the party and Kayode Fayemi, its candidate.

The just concluded mega rally of the All Progressives Congress (APC) @APCNigeria in Ekiti State is a charade, a mockery on the party and its rejected governorship candidate, Dr Kayode Fayemi. @kfayemi pic.twitter.com/oV8DxEGiME

While lambasting Kogi State governor’s role in the campaign, the party commended Senator Chris Ngige, the Minister of Labour, who, mistakenly advised the people of Ekiti to reject the APC candidate and endorsed the PDP-led administration of Governor Ayo Fayose.

Watch with your own eyes as God uses APC’s Chris Ngige to prophesy that Fayose’s @OfficialPDPNig candidate is better for Ekiti. “When a man's ways please the LORD, he makes even his enemies to be at peace with him”-Proverbs 16:7. God took control of Ngige’s mouth. pic.twitter.com/PxYlhs5vda

Naija news learnt that, PDP, in a statement by Kola Ologbondiyan, its national publicity secretary, described the APC rally as a charade and mockery on the party and its candidate.

According to PDP, the refusal of Ekiti people to attend the rally led to APC’s resort to renting crowd from neigbouring states.

“Nigerians watched in amusement as even the rented crowd refused to respond to the APC slogan or brandish their brooms, for which Governor Abdulaziz Yari of Zamfara State openly nagged them for ‘sleeping’ at the rally. “In a highly embarrassing effort to spur the rented crowd, Kogi State governor, Yayaha Bello, from whose state a substantial part of the crowd was rented, had to recourse to his native Ebira language in addressing the rally.

We are however not surprised at the remarks by the Minister of Labour, Senator Chris Ngige, who, in sub-conscious sincerity, advised the people of Ekiti state to reject the @APCNigeria candidate and endorsed the @OfficialPDPNig-led administration of Governor @GovAyoFayose pic.twitter.com/ElxemghUh3

“Moreover, President Muhammadu Buhari’s attendance worsened the woes of the APC and its candidate, as the president could not boast of any federal project in the state, but sought to beguile the people with his usual list of empty promises in his prepared hollow speech.

“This is in addition to empty sloganeering by APC leaders at the rally, particularly its unelected factional national chairman, Adams Oshiomhole, whose attempt at political showboating could not help the situation.”

Let Fayose Teach you On How To Govern, PDP Tells Buhari

“It is even reprehensible that the poster boys paraded at the rally included governors like Bello, who are owing salaries in arrears of two years as a result of which many public servants in Kogi State had recourse in suicide.

“Nigerians are therefore at a loss as regards what governors who have failed their respective states had to tell the people of Ekiti State where PDP had made life better.

“We are, however, not surprised at the remarks by the Minister of Labour, Senator Chris Ngige, who, in sub-conscious sincerity, advised the people of Ekiti State to reject the APC candidate and endorsed the PDP-led administration of Governor Ayo Fayose,” the party said.

PDP, therefore, counselled Buhari to use the visit to learn the art of governance from Fayose, instead of his proclivities for divisiveness, harsh economic policies and de-marketing of the nation in the international arena.

We therefore counsel President @MBuhari to use the visit to learn the art of governance from @GovAyoFayose instead of his proclivities for divisiveness, harsh economic policies and de-marketing of our nation in the international arena. pic.twitter.com/dspLwKJen9

“Mr. President should go round the state and see for himself, the numerous landmark projects executed by the Fayose-led PDP government, after which he should appropriately advice his party members on their futility of contesting the July 14 governorship election in Ekiti.

“Further, the people of Ekiti State have not forgotten how President Buhari and the APC failed to take any action or even offer any soothing words when marauders attacked and murdered innocent citizens in the state earlier in the year,” it said.