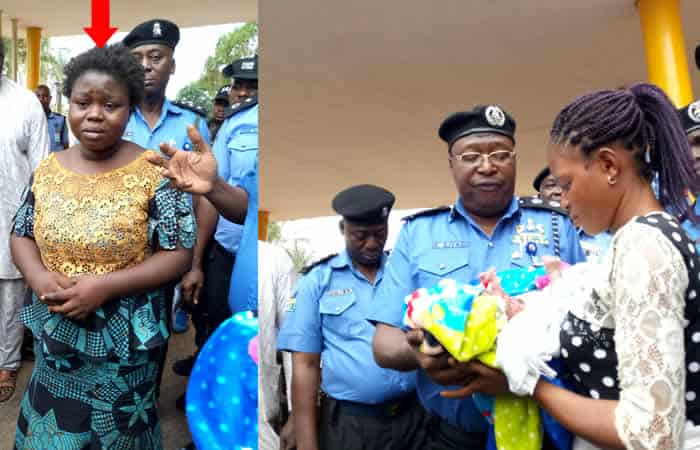 Suspect Claims To Have Experienced Ten Years Of Childlessness

Mrs Bunmi Adebayo, who was arrested for stealing a three week old baby in Modakeke, Osun State, said the move was out of desperation of not having a baby after 10 years in her marriage.

The 26 year old woman allegedly stole the baby, whose name is Oluwaseun David, on Sunday.

Adebayo, who is a resident of Magboro, in the Obafemi/Owode Local Government Area of Ogun State, was apprehended at Orile Imo village by the men of the state police command, where she had fled with David.

Ahmed Iliyasu, the state Commissioner of Police, on Tuesday said the suspect took her desperation too far.

While speaking on the case, he said, the suspect had lied to her husband, who used to visit her at her abode at intervals, that she was pregnant.

Iliyasu added that after nine months, the suspect called her husband and broke the news that she had been delivered of a baby boy.

He said the elated husband, Gbenga Adebayo, rushed down to her residence, but became curious when he demanded the placenta and the suspect was unable to present it.

Iliyasu said, “When the husband asked her to breastfeed the baby in his presence, she was unable to do so.”

Bunmi absconded from home after realising that the husband was suspicious, prompting Gbenga to report the matter to the police.

The police search team reportedly caught up with her and the stolen baby at Orile Imo on Saturday, and she was arrested, while the baby was rescued.

Bunmi, who claimed to be a hairdresser, said, “I am 26 years old and I have been married to my husband for 10 years, but I have yet to have any child.

“I stole the baby out of desperation to have a child. I wouldn’t have harmed him.”

Iliyasu later handed over the baby to his parents, Eniola and Peter Oluwaseun.

They both expressed joy at getting back David, who they said was their first child