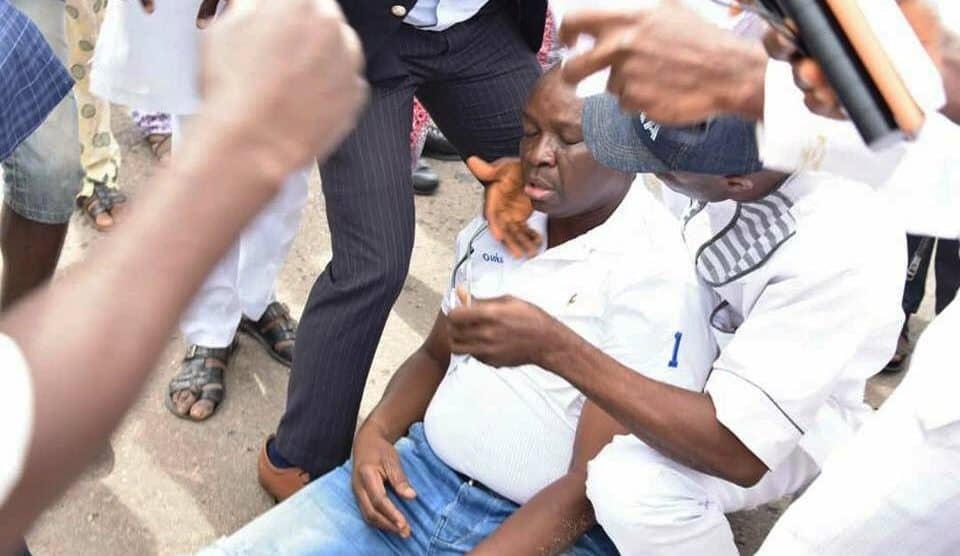 Governor Ayodele Fayose of Ekiti state, reportedly collapsed during a PDP rally in the state ahead of the July 14 governorship election in the state.

The governor’s collapse follows tear gas attack by policemen on the venue of the political campaign, Naija News understands.

Earlier, Governor Fayose had disclosed through his twitter handle that the government house in Ekiti is under attack by armed security operatives.

#EkitiDecide2018
This is the entrance to Ekiti Govt House now blocked by gun wielding mobile policemen. The plan is to prevent our victory walk slated for today but we will remain undeterred.

Power of God and the people will prevail over Federal Power. pic.twitter.com/NXhWKZuckP

The Peoples Democratic Party, PDP while reacting to the attack on Governor Ayo Fayose by Policemen in Ekiti earlier today  alleged that the Policemen were acting under instructions from President Muhammadu Buhari as they reportedly teargassed and dragged Fayose on the floor. Below is a statement from the party on the incident;

Ekiti 2018: Happening now at the Ekiti State government house, Ado Ekiti. Security operatives on the instructions of President @MBuhari has taken over @GovAyoFayose’s office. Teargassed him and pulling him on the floor. See images below. Template for 2019 Elections @WhiteHouse pic.twitter.com/5myTMZXwvU