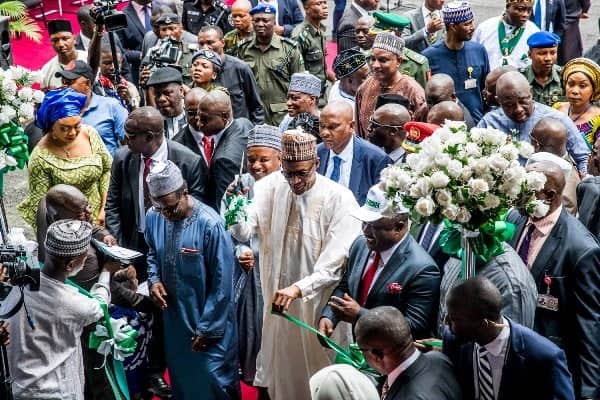 Buhari describe his first visit to the state as historic

because it was his first official visit to any state after assuming office as President and secondly, the purpose was to the ground-breaking of the landmark project.

“Today, I am here again in the state to commission yet another visionary and trail-blazing project, the Calabar Rice Seedling Factory built by the state government.

“I must say that visiting the state for the second time within three years in connection with people-oriented and flagship projects of Governor Ayade is very welcome and very satisfying to me.’’

He stated that his administration, on assumption of office launched a zero-oil economic roadmap aimed at encouraging investments in other sectors of the economy, particularly agriculture and also reduce Nigeria’s dependent on oil.

The President appreciated the governor of the state for keying into the policy as introduced by the Federal Government, making the state one of the reference points in the country’s agricultural revolution effort.

“Our gathering here today is no doubt a determination woven through to precision and a glowing testament to the fact that the policy is working.

“Indeed, this factory speaks loudly about the giant strides we are making in agriculture as a country. This monumental project for which we are gathered here today is a marvel to behold.

“The factory, which is said to be the first in Africa, is an automated plant with a capacity to produce high yielding vitaminized and disease resistance rice seedlings.

“What we expect is that Seedlings from this factory will improve rice yield from the current national average of 3 to 4 tons per hectare to about 9 to 10 tons per hectare, thus helping to ensure rice sufficiency in the country and doing away with imports and saving foreign exchange for Nigeria.’’ he said.

He pointed further that Agriculture was the only way with which the country can deal with the problem of unemployment in the country.

He enjoined relevant federal government agencies such as the Ministry of Agriculture and the Central Bank of Nigeria (CBN), through their Anchor Borrower’s Programme, to partner with Cross River in the area of supply of seedlings to farmers.

President Buhari acknowledged Governor Ayade’s other investments in agriculture such as the ongoing construction of an Ultra-modern Rice Mill in Ogoja, the Cotton Farm in Yala, the Cocoa Processing Plant in Ikom and the Banana Plantation in Odukpani, the feed Mill and Yellow Maize Farm in Obubra as well as the Ultra-modern Poultry Farm for export of frozen chicken.

“It is evident also that by conceiving projects such as these, Ayade has a keen eye for tomorrow; focusing on projects that are building a new economic base for the state rather than projects with short term benefits for the purpose of making cheap political gains.’’ he said

He added that Nigeria was on his way to achieving food security in the country.