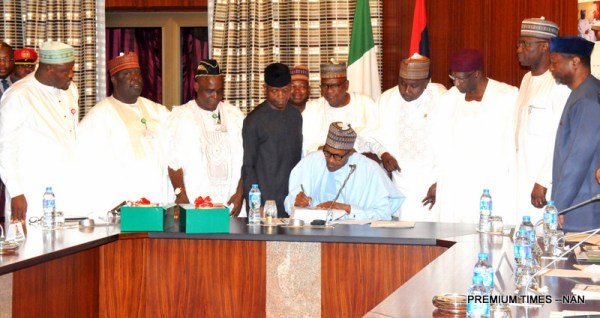 The Nigeria Union of Petroleum and Natural Gas workers, NUPENG has threatened the members of the National Assembly over alleged cut of N11.5 bilion from allocations to critical infrastructure like roads in the 2018 national budget.

In a statement by its President, Prince Williams Akporeha, in Abuja this weekend, NUPENG, noted that cutting allocations meant for crucial and very critical infrastructural projects with huge socio-economic impacts on national and regional roads like the Lagos-Ibadan expressway, second Niger Bridge, ancillary roads, East-West road, Bonny-Bodo road and others, to say the least, was unreasonable and insensitive to the yearning of the people.

It threatened that it might be forced to mobilise against members of the National Assembly if nothing was done to make amends on the situation in order to make the nation’s highways motorable.

“We are still in shock that these critical trunk roads, which play significant roles, particularly in the value chain of the oil and gas downstream sector and other critical and crucial economic activities in the country would be expunged from the national budget at a time the union is craving for state of emergency on Nigerian roads.” the statement read.

“NUPENG strongly believes that the constitutional direction of a national budget must be patriotically designed to consolidate the achievements of previous budgets to deliver on Nigeria’s Economic Recovery and Growth Plan as envisaged by the current government, which is in the same line of logical, reasonable and responsible thought process that we expect from our federal lawmakers.

It stated that the Union would not fold hands and do nothing when “lives were being carelessly and pitiably wasted on the highways as well as facing unimaginable hazards on the roads, particularly the Petroleum Tanker Drivers (PTD) branch of NUPENG, whose main professional calling to the service of our nation is the lifting and distribution of petroleum products across the length and breadth of the nation in order to energize social and economic activities of all Nigerians.”

We hate to always raise concerns over road accidents involving our members as a result of deplorable conditions of nation’s road networks.

It is also an open secret that the current nature of our roads is a real contributory factor to tanker accidents which we are experiencing virtually on daily basis; unfortunately the 2018 Appropriation Act which we thought could save us from this life threatening menace has again dashed our hope.

NUPENG also called on Legislature and the Executive as well as  all relevant stakeholders in government to urgently look into all the complains on road infrastructure projects as well as other critical areas affecting the oil and gas sector that according to the statement were “flippantly jettisoned” from the budget in the interest of all Nigerians.