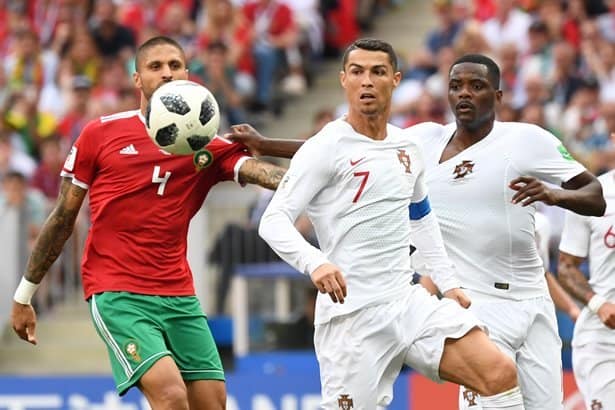 Cristiano Ronaldo has added to his goal tally in the World Cup after heading the ball into the net in a 1-0 win against Morocco, as they edge closer to the round of 16.

Ronaldo scored in the fourth minute to give the Portugal side a win over Morocco.

The Victory sent Portugal top of Group B on four points ahead of Spain’s game against Iran in Kazan, as a second straight defeat for Morocco condemned the African nation to an early exit in their first World Cup appearance since 1998.

Morocco coach Herve Renard opted for a back four, with Manuel Da Costa and Nabil Dirar coming into the side, to provide added protection against the “absolutely exceptional” Ronaldo after his hat-trick against Spain.

But his plans were torn apart within minutes at the Luzhniki Stadium as Ronaldo wriggled free of the imposing Da Costa to bury an unstoppable header past a helpless Monir El Kajoui.

It was Ronaldo’s fourth goal of the tournament, more than his combined tally at three previous finals, and left him trailing just Iran’s Ali Daei (109) on the list of top international goalscorers.