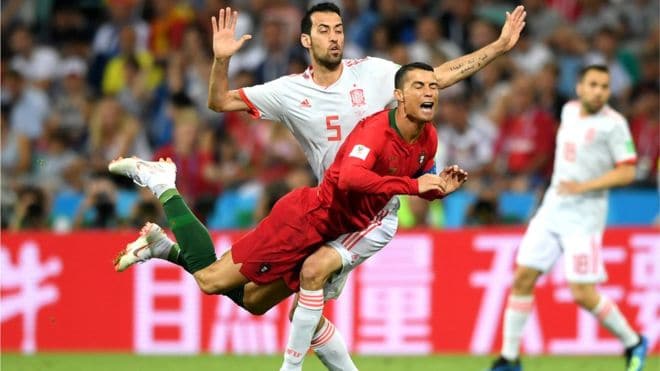 Ronald in action during Spain vs Portugal match

Its just three days since the World Cup started and 16 countries have already shown the world why they are in Russia.

This are some of the things that make us wonder how the remaining 27 days of the competition would be.

After just one match, Ronaldo is already eyeing the golden boot of the tournament as his hat trick help Portugal play a 3-3 draw with Spain.

But thats not the only surprising moment at the World Cup.
Four players have score late goals, three of those goals help some teams win match while Ronaldo’s own help them draw their match.

Out of the four first four matches that have been played, three penalties have been scored. Ronaldo scored for Portugal, Antoine Griezmann scored for France while Mile Jethenak scored for Australia.

Africa has not won a match at the 2018 World Cup as Egypt and Morocco lost their first match.