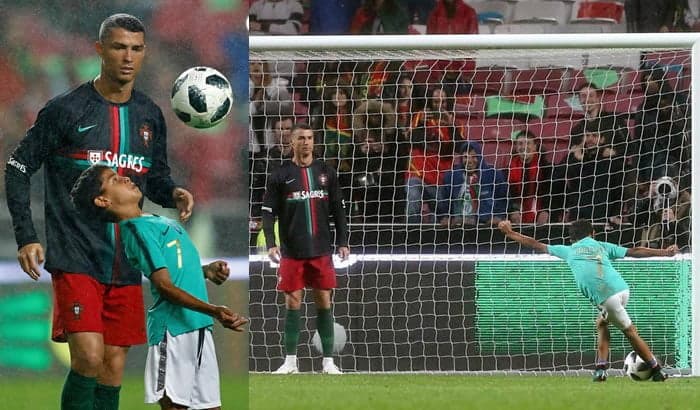 Cristiano Ronaldo and his son, Jr after the Portugal and Algeria match on Thursday. (Photo credit: Sun UK)

Ronaldo Fail To Record Any Goal During Friendly Against Algeria

Cristiano Ronaldo’s son who has been seen on many occasion been trained by his father, on Thursday took to the Estadio da Luz pitch after Portugal’s 3-0 friendly win over Algeria to show off his football skills.

Ronaldo Jr, nicknamed Cristianinho, seems to have some of his father’s genes in him as he unleashed a stunning strike, reports Express UK.

He showed off his skills and he produced the goods to the delight of the Portuguese crowd, he exhibited some strikes that will surely make his father, Ronaldo proud of him

The Real Madrid star who had no goal to his name at the friendly match had seen an effort ruled out for offside as he played 74 minutes in his first match since the Champions League final.

He is one of the favourites to win the Golden Boot at this summer’s World Cup with Portugal facing Spain, Iran and Morocco in the group stages.

The win over Algeria was Ronaldo’s 150th international appearance and he has scored 81 goals for his country. The five-time Ballon d’Or winner will be hoping to add to that tally in Russia.

The final whistle doesn’t mean the show is over. Cristiano and his son, it’s clear the apple doesn’t fall far from the tree! #ConquerYourDream pic.twitter.com/YgebltOYpa