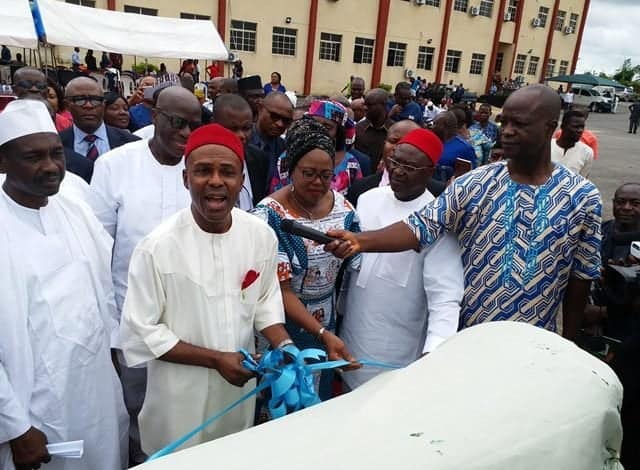 An erosion and flood control project at the University of Calabar (UNICAL), has been commissioned and handed over by President Muhammadu Buhari to the authorities of the institution.

Naija News understands that the Project was done for the benefit of the University and its environs, through the Ecological Fund Office by the Secretary to the Federation.

According to the President, the project was awarded in the first quarter of 2017 and awarded by the Federal Executive Council on April 5, 2017 and was one of 18 ecological interventions across the six geo-political zones approved by him.

Dr Ogbonnaya Onu, the Minister of Science and Technology, who represented the president stated that project which spans about two kilometres, is intended to properly channel waste and flood water into a safe discharge point, thereby preventing erosion and flooding within the University community and hence protect lives and property.

The Nation Online reports that he disclosed that the federal government had to intervene through the project because the campus was experiencing serious flooding and environmental degradation.

Dr Habiba Lawal, Permanent Secretary in the Ecological Fund Office stated that the project was commenced in April 2017 with a completion period of eight months and was initated because of the appeal of the school authorities.

Engr Felix Okeke, who represented the Permanent Secretary said that the University Authorities need to sustain and maintain the project because the project is now theirs.

Prof Zana Akpagu, the Vice Chancellor of the University, stated that the project was a big relief to the University, as he described the situation before as a nightmare.

He expressed commended the President Buhari for the gesture, and promised to identify with his programmes.

He disclosed that in conjuction with ICPC, students in the university are studying compulsory courses concerning anti-corruption.

“The project has given us new hope to open up the university towards this axis. Before now it would have been suicidal,” Akpagu said.