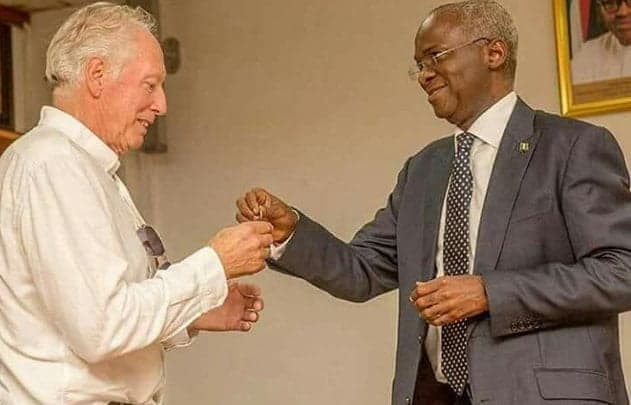 The Reward Will Inspire Eagles In Russia – Fashola

Former Super Eagles coach, Bonfrere Jo, got a surprise on Tuesday as the Federal Government, fulfilled its promise of 22 years ago, he was handed a keys to a three-bedroom apartment in Gwagwalada, Abuja.

The former coach of the national U23 team was promised a house after seeing the team to clinch the men’s football event at the Atlanta ’96 Olympic Games.

Babatunde Fashola, Minister of Power, Works and Housing, while handling the keys to the house to Bonfrere during a brief ceremony in Abuja, stated that the reward would inspire the Eagles at the 2018 World Cup competition in Russia.

Fashola said, “Let me on behalf of the President apologise to you that it has taken so long for the Nigerian government to come through. We thank you for your contribution to the development of our country, our youth, football and to say that it is better late than never. Nigeria always come through, we have come through for you.

“It is proper that with just few days to another World Cup, Nigeria fulfils and redeems this pledge and I hope that this will serve as an inspiration to our players going to the World Cup and the officials that this government will be there for you all the way.

“Ordinarily, this ought to be a short meeting but if it take 24 years for the government of the country to respond to its citizens, it must assume a news making event. This is consistent with the commitment that the President has made that once again, he will make Nigerians proud of their country. This country should always be there to respond to the needs and expectations of the citizens.”

Bonfrere Jo, who is now 71 years old appreciated the Federal Government and stated that the gesture would encourage sportsmen and women to work hard, knowing that their achievements would not go unrecognised.

“As a coach that was directly involved in the 1994 Africa Cup of Nations and the 1996 Olympic football gold medal victories, I crave for an impressive performance for our Super Eagles in Russia and offer my support to the team and technical staff,” he said.