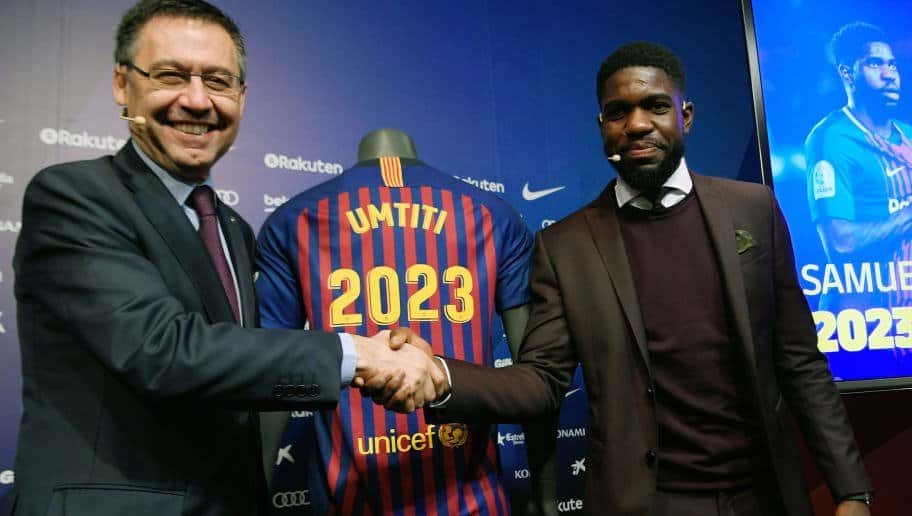 Barcelona centre-back Samuel Umtiti has agreed a new five-year deal with the Spanish champions until 2023, with a 500m euro (£437m) release clause.

Naija News Understands that The 24-year-old defender who had earlier been linked with a move to Manchester United agreed to the deal yesterday .

However, after helping Barca win LaLiga, two Copa del Reys and the Spanish Supercopa during his two seasons in Catalonia, Umtiti said that heading somewhere else never crossed his mind.

“I’m very happy and proud to be able to renew with Barcelona. My dream was to be with the best. Since the first day, I’ve felt at home at the club and I want to stay here,” Umtiti told a press conference. “My priority was always to renew with Barca. I never saw myself in another team.”

“This club has been in my heart since I was a kid, and it is a dream to play here with players like (Lionel) Messi. “I’m staying at Barcelona because this is the best team in the world. I’m not here because of money. That’s important but I’m here to win titles, which is the most important thing. “Next season I hope we’re going to fight for all the titles. That’s why I’ve signed.

Umtiti, 24, has since scored two goals in 88 appearances for Ernesto Valverde’s side. In that time, he has won one La Liga title as well as two Copas del Rey.