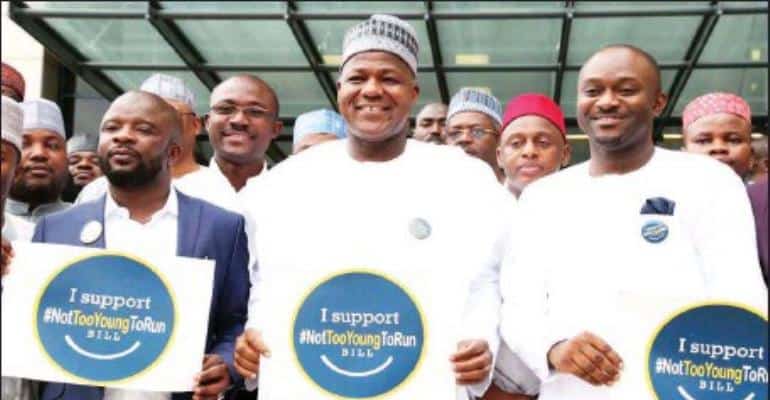 The Nigeria political space is bubbling with many interested aspirants signifying their intentions to contest the forth coming general elections in 2019 at both the states and federal levels is a significant development and phenomenon.

And these numbers are increasing everyday with less than 10 months to go and without any of them (the aspirants) posing a significant challenge to the old breeds or recycled leaders they intend to outwit and outrun come year 2019.

We really appreciate this political awareness that is cropping up amongst these sets of political aspirants i.e The “#NotTooYoungToRun” (thank God for the bill that was signed recently into law by President Buhari last Thursday, 31st May, 2018) or The New breed Political Aspirants. And the resultant effects of this new movement is that our democracy is developing.

But unfortunately they seems to be missing the marks and shooting themselves  on the foot by increasing the chances of the old breeds they intend to displaced from the exalted positions at all the levels.

One of the major marks that these sets of aspirants are not taking into consideration and refusing to harness is the spiritual law of “unity of purpose.”

The more all of them (the new aspirants) are coming out to contest the coveted positions at the difference levels, the more they are dissipating or frittering their votes away, thereby clearing the way for the return of the recycled leaders back to power on a roller coaster.

Though we know there are many pretenders among them (the new aspirants), who are not serious, but we have noticed that some of them are really ready to serve and make a real change in the political arena come 2019.

These aspirants needs to come together in “unity of purpose” to face the old breeds who are not ready to leave the scene at all costs. They are ready to continue to dominate the political scene and with the huge financial resources in their disposals.

But with the spiritual law of “unity of purpose” the new breeds aspirants can displace them even with their huge financial base, if they can agree for this elections to come together as a formidable teams. They can use their “unity of purpose” to mobilize the youths demographics, which we all know are the majority.

Please see what the Bible says in Genesis 11:6 from the New Century Version:

“The LORD said, “Now, these people are united, all speaking the same language. This is only the beginning of what they will do. They will be able to do anything they want.”

We can take a cue from this inspiring scripture in reference to before Nigeria obtained her independence in 1960. Prior to this, there was a massive movement of young Nigerians under the political catalyst of what was called the “Nigerian Youth Movement” that was founded in 1933.  According to Wikipedia (https://en.m.wikipedia.org/wiki/Nigerian_Youth_Movement), the N.Y.M became the first authentic Nigerian nationalist organisation to be formed and the movement acquired national outlook and became a strong national movement, especially between 1937 and 1938, when the likes of prominent leaders of the calibers of Nnamdi Azikiwe, H.O. Davies, Ernest Ikoli, Kofo Abayomi, Obafemi Awolowo, Samuel Akintola, Anthony Enahoro, and many other young Nigerians as that time, were together in one political movement or organization, and this “unity of purpose” was the initial impetus (multi-ethnic movement) that they used to send notice to the British Rule in Nigeria and this set the motion for the ultimate self government, prior to the independence in 1960.

I believe with this inspiration from our early leaders, who jettisoned ethnic affiliations and initial political alignments to peacefully wrestle political power from the then colonial masters with one voice.

We can liken, the present dominance of old breeds to the then colonial masters, and how beautiful will it be to see the likes of those who have signified their intentions to vie for the President of Nigeria, in persons of: Kingsley Moghalu, Omoyele Sowore, Fela Durotoye, Alistair Soyode, Funmilayo Adesanya-Davies, Omololu Omotosho, Lewis Omike, Thomas-Wilson Ikubese, Adamu Garba II, Yul Edochie,  Professor Remi Sonaiya, Sam Nwanti, and many other emerging aspirants, to be together in one national movement.

And hoping that similar “unity of purposes” and synergies will be replicated at other levels of the elections, at the states and federal levels, so that they will not dissipate their votes, thereby perpetuating the old brigades back to their unrelenting hold of the political reins.

Believe it or not, the old brigades have become spiritual principalities, and to peacefully wrestle power from them, the emerging aspirants, must approach this movement, with spiritual “unity of purpose” to squarely face them.

This is not a Social Media propaganda, though we cannot downplay the significant roles of Social Media, in modern day electioneering campaigns, the real strategy is to come together under one umbrella, take control of the political space. And by coming together in “unity of purpose” the new breeds can cause an upset like the upheavals caused these young aspirants in their terrains like the likes of  Justin Trudeau (Canada), Emmanuel Macron (France), Sebastian Kurz (Australia) and in other recent political climes. So, please don’t dissipate your energy….don’t fritter….or scatter….away your votes thereby bringing in the recycled leaders to continue to make sway.

The new breeds needs to be together and to choose a leader if they are really serious to take the political power come 2019.

Please look @ this scripture from the Bible below to buttress this synergy in 1 Samuel 22:2 NKJV and which says:

The above scripture is an extract from the Bible during the time of David, people from different works of life gathered together to make him their leader. And I think this emerging new breeds can peacefully do the same thing.

Finally, I conclude with this scripture to further buttress the importance of “unity of purpose” that can make these sets of new breeds political aspirants emerge to make a positive difference in Judges 20:8-11 HCSB Version:

“Then all the people stood united and said, “None of us will go to his tent or return to his house. Now this is what we will do to Gibeah: we will go against it by lot. We will take 10 men out of every 100 from all the tribes of Israel, and 100 out of every 1,000, and 1,000 out of every 10,000 to get provisions for the people when they go to Gibeah in Benjamin to punish them for all the horror they did in Israel.” So all the men of Israel gathered united against the city.”

Therefore from the on going “The “#NotTooYoungToRun” or The New breed Political Aspirants” can emerged as new leaders if they are really serious for 2019 general elections.