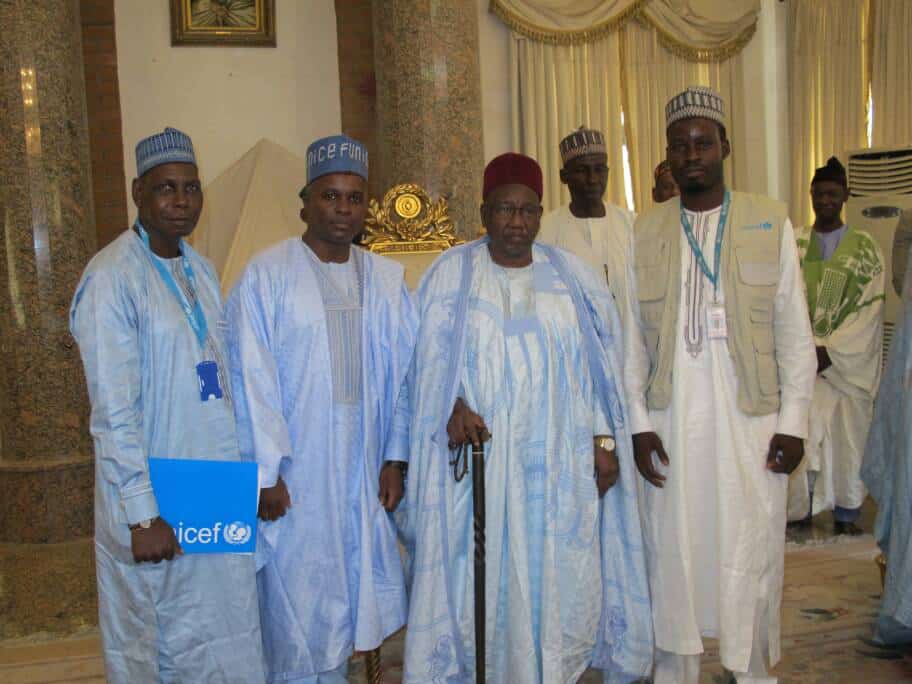 Shehu of Borno and Officials of UNICEF

Umar Ibn Garbai, the Shehu of Borno on Friday has agreed to spearhead the UNICEF’s cholera campaign to prevent an outbreak of the endemic and seasonal disease.

During the visit of Geoffrey Ijumba, UNICEF Chief Field Officer on Borno on Friday, the Shehu said that the emirate would collaborate with the fund towards eradicating this disease.

US$2 million have been earmark to support the response to a deadly cholera outbreak in Yobe State, North-east Nigeria, which is a neighbouring state to Borno.

A total of 404 cases and 15 deaths have been reported, representing a 3.7 per cent case fatality rate, Since the beginning of the outbreak, which was officially declared in four local government areas of Yobe in March.

“The issues you raised regarding healthcare, nutrition, sanitation and hygiene, including education are very critical in a land facing humanitarian challenges.

“I would personally work hard to record improvement to alleviate the suffering of our vulnerable people.

“This is a task we must achieve in favour of children and for the future.

“Traditional leaders in Borno would work hard to ensure that our people are aware of the dangers of cholera and how to prevent it,” he said.

The traditional leader applauded the effort of humanitarian organization to the development and assistance of Children.

“We always appreciate the good work UNICEF is doing over several years in Nigeria and the northeast in particular, especially during the conflict which posses a huge challenge to people particularly children and women,” he added.

The Shehu regretted that children had lost a good part of their lives out of school due to the insurgency.

Earlier, Ijumba, appreciated the emirate for prioritising its support for women and children in all areas of UNICEF’s activities in the state.

“The specific issues that I would like to bring to your attention is that we are going into the rainy season.
And right now there has been instances of Cholera outbreak in some part of Borno.

“We would like you, with the help of other traditional rulers, to sensitise the good people of the state to promote cleanliness, hygiene and good sanitation.

“On our part, we will deploy a team of community mobilisers to conduct house to house sensitisation in every community to promote hygiene in preparation for the raining season.

“We want to also make sure that water for drinking in Borno is properly stored and safe for drinking,” he said.

He expressed his disappointment over the refusal of the people in the state to accept “water chlorination”.

“We hope this time around, you will take a very strong message to them on the importance of water chlorination.

“We will work together with the government, RUWASA and other partners to make sure that this is done,” Ijumba said.