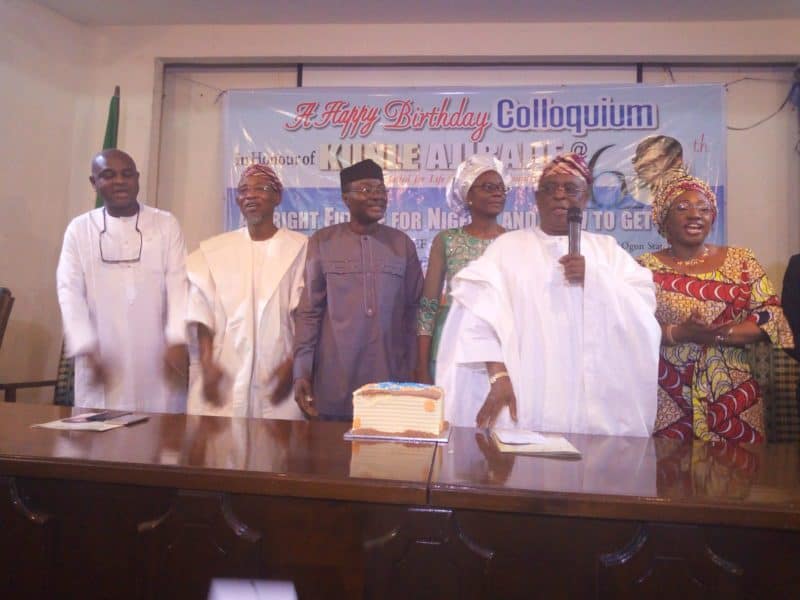 A former governor of Ogun State, Olusegun Osoba, on Wednesday has called for urgent reforms in the Nigeria police system.

Osoba who was speaking at a colloquium held to celebrate journalist and writer, Kunle Ajibade, narrated how former president Olusegun Obasanjo in 2003, used the Police to allegedly rig him as well as four other governors of the South-west out of power.

Mr Osoba who was Ogun State governor between 1999 and 2003 under the platform of the Alliance for Democracy (AD) was voted out of office in 2003 when Gbenga Daniel of the Peoples’ Democratic Party (PDP) was declared winner of the governorship election.

Apart from Mr Osoba, other governors of the South-west under the platform of the AD also failed to win their re-election campaign. They included Lam Adesina of Oyo State; Bisi Akande of Osun State; Adeniyi Adebayo of Ekiti State; and Adebayo Adefarati of Ondo State.

Bola Tinubu, a former governor of Lagos State and now national leader of the APC, was the only governor from the party who survived what analysts described as the PDP ‘electoral tsunami’ in the region.

Mr Osoba however explained that the governors disagreed with the federal government on the nation’s governance structure and other issues of power and resource control. He claimed they were, however, rigged out by Mr Obasanjo with the use of the police.

He said, “We were going to court to tackle issues of fiscal responsibilities on police. In my own case, I had Israel Ajao as my commissioner. On the eve of 2003 elections, Obasanjo knew he was going to write figures and Ajao was cooperative with me; letting me know where ‘Area boys’ can disrupt and other things… giving me security report.

“What Obasanjo did was that two days before the election he transferred him to Abuja, by road! He was sent to Abuja. I had to go and fight until he was brought back a day after the election. That’s to show you how a president can misuse (the police).”

Mr Osoba, buttressing his point on how the police can be abused by the federal government, also recalled how a former police chief, Musiliu Smith, was arbitrarily sacked by Mr Obasanjo.

Mr Smith as reported by Naija News, was recently appointed chairman of the Police Service Commission by President Muhammadu Buhari, but the former Ogun State Governor said the motive for Mr Smith’s removal was to pave way for the emergence of Tafa Balogun, whom he said Mr Obasanjo ‘used’ to rig the elections.

“I can recall the day he decided to sack Musiliu Smith,” he said. “He (Mr Obasanjo) called a council of state meeting… he got there, told Smith to give us report and said he should excuse. The next thing was, Bola Tinubu said, ‘I hope you are not scape-goating, I hope you are not going to look for a scape-goat!’ Bola had a hint that he was going to do something about Smith and he was hollering in the council of state meeting.

“At the end of the day, he got what he wanted and put his own man, Tafa Balogun, who helped to rig the election for him.

“That is the story of the democracy that we are having and that’s why you must not relent. So we were rigged out and the cases that we were running could not continue because his own men came to the council of state.”

Mr Osoba gave another example of Gani Adams, leader of the O’dua Peoples Congress, whom he said was arrested somewhere around Ikorodu. He was charged to court and Bola Tinubu sent his attorney general to stand for him before he was released, he explained.

“There were cases where some of us tried, I am not being immodest,” he said.

Femi Falana, lawyer and rights activist, had  earlier explained that the federal government had no monopoly over the control of the police, urging the state governors to demand for their constitutionally guaranteed rights to police administration.

In attendance at the event were Nobel laureate Wole Soyinka; Governor Rauf Aregbesola of Osun State and a host of others.