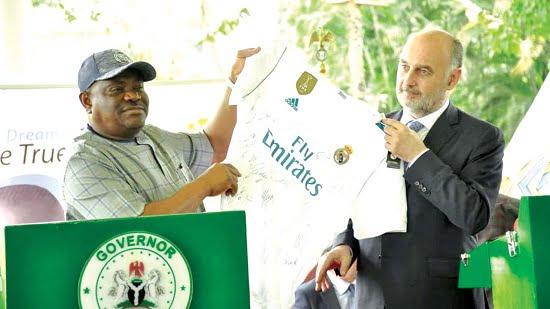 While laying the foundation, Ahmad Ahmad, CAF President, stated that the academy was not only for Port Harcourt or Nigeria, but also for the entire continent.

Nyesom Ezenwo Wike, Rivers State Governor, and the initiator of the Real Madrid Football Academy said the academy would help in building a new crop of international stars across the country, and Rivers State in particular.

“When we initiated this laudable project, people doubted it, making different cynical comments. However, today, this project has come to fruition. It will be a solid foundation for our children,” he said.

“We are proud to be associated with the best club in the world. Therefore, we will groom the best set of footballers.”

Governor Wike said that the project will be completed in seven months and commissioned for use by members of the public, adding that children to be admitted into the school will be between eight to 16 years.

Amaju Pinnick , Nigeria Football Federation (NFF) President, said with the Real Madrid Football Academy, Nigeria will ensure the emergence of another generation that will keep the nation’s flag flying in the international football circle.

Tareh el-Hajj, General Manager of the Real Madrid Football Academy in Port Harcourt,  said the academy was in full swing, adding that the management of the club will liaise with the Rivers State Government to set in motion modalities to ensure it succeeds.