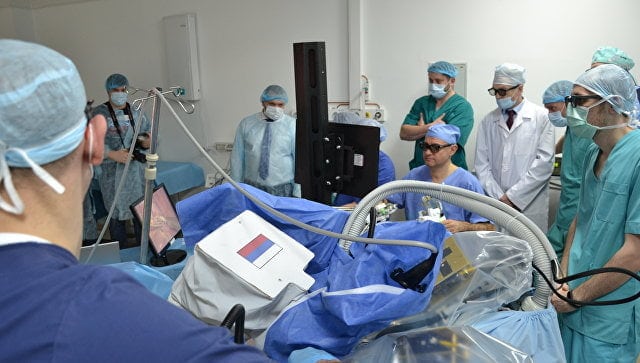 For the first time in Russia, Russian doctors carried out a neurosurgery, obtaining a sample of a tumour for further tests, with the aaid of a robot, the Health Department in Moscow said on.

“The surgery was performed on a 37-year-old patient with a deep-seated brain tumour, whose location presented complications.

“The surgery was successful and lasted less than an hour,’’ the department said.

A simply sample of the tissue was taken by the specialists of Sklifosovsky Research Institute of Emergency, to determine further treatment.

The where about of a tumour made magnetic resonance imaging diagnostics impossible.

As a result of the size of the tumour, doctors are prevented from carrying our craniotomy, a surgery that requires opening the skull, as it was too risky.

The special features of a surgery robot include high precision, low risk of injuries and safety.

“This robot, alongside other methods, allows reaching thin and hard-to-reach tissues in the brain and taking a sample.

“It was the first time that such a surgery was carried out in Russia,’’ the department’s press service said.

The doctors untends to determine whether to treat the patient with chemotherapy or radiation therapy after studying the tissue sample.

According to reports, the institute intends to keep using this type of surgery in the future.