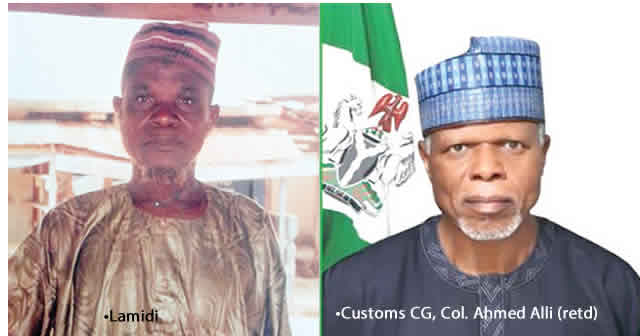 Custom Officers Allegedly Kill A Farmer For Intervening In Arguement

A farmer from Olorunda Village of Oyo State, Lamide Oke, who was a help for survival and support to many friends and family was last week Monday allegedly shot by customs officer.

The 70 year old man was allegedly shot dead by the officer while he was trying to intervene in an argument between some Customs operatives and youths in the community over a barrier erected on a road within the neighbourhood.

Report had it that the barrier was put up by some villagers, which had two poles on both sides of the road with a bamboo placed across them, so as to reduce the recurring accidents caused by reckless motorists plying the route.

Further report had it that a team of six Customs officers in a Hilux van got to the spot around 12:00pm and saw Lamidi and his younger brother, Muritala Oke, who were returning from the farm.

The officers were said to have ordered 66-year-old Muritala to remove the barrier so they could pass. But the man declined the order, telling them that motorists usually opened the barrier themselves and mounted it back after leaving the spot.

Enraged by the man’s response, the officers reportedly disembarked from their operational vehicle and uprooted the barrier.

Muritala, while speaking with newsmen revealed that some youths met the officers in the act and challenged them. He said the officers responded by shooting indiscriminately, during which the deceased intervened to make peace.

“As my brother and I were returning from the farm that day, we met the Customs officers in a van at the spot where the barrier was mounted. They asked us why we mounted the barrier and I explained to them that many residents, especially children had been knocked down by speeding vehicles. Till now, a resident, whose leg was broken in an accident on the road, is at the University College Hospital, Ibadan.

“Five of them pulled over in anger and started destroying the barrier. They resorted to shooting as some youths tried to caution them.

“My late brother sent the youths away and tried to plead with the Customs officers. The sixth officer, who appeared to be their team leader, came down from the vehicle and shot my brother directly in the chest. They hurriedly entered their van and fled. They were in uniform and Nigeria Customs Service was written on their van. We did not get to the hospital before he died.”

The deceased’s first child, Gafar, who lives in Abuja, said his father had called him on the telephone that Monday morning, adding that he was shocked when he got a call that the man had been shot dead.

He said, “I visited home (Oyo State) and was supposed to return to Abuja on Monday. He called me early in the morning and I told him I wanted to get something for my wife and would go back to Abuja the next day. To my surprise, I was called around 12:30pm that my father had been shot dead by a Customs officer. I didn’t believe it until I saw his corpse.

“He was buried on Wednesday. We cannot forgive those customs officers for many reasons. One, my father was an easy-going person. He was a generous man and the breadwinner of the family. I could not remember the last time I gave him money. One of my siblings had abandoned his wife and children. It was my father who was taking care of his wife and the children.

“We may not be able to get justice, but we will forever curse them because they have brought sorrow to our family.”

The distraught widow, Adijatu Lamidi, said it was “extremely painful” to lose Lamidi in such a cruel circumstance, lamenting that she would live the rest of her life with the sad memory.

“My husband didn’t tell me he was going to die when he bid me goodbye on Monday morning on his way to the farm. He called me on the telephone when he got to the farm. I could not believe that would be our last conversation,” the 60-year-old added painfully.

A resident, Afudol Jaleel, who said the Alafin of Oyo had waded into the case, revealed that two expended bullets were recovered from the scene of the incident.

He said the barrier was erected after a consensus was reached between the villagers and motorists who usually plied the road.

“I am wondering why the officer would shoot the elderly man, who was trying to make peace. The police from Iyaganku came to inspect the scene of the incident on Thursday. A representative of Alafin of Oyo was also at the scene for assessment.

“Apart from the two expended bullets recovered by the police, we had already picked six bullets from the scene and taken them to the police,” Jaleel said.

The spokesperson for the Nigeria Customs Service, Oyo/Osun Command, Abdullahi Lagos-Abiola, said the police had written to the agency on the incident.

“But so far, I don’t know how authentic that incident is. We have contacted all our men; we don’t have such an incident. One thing again is that, officers from the headquarters or Federal Operation Unit can come in and operate without seeking the permission of the command.

“As far as our officers in Oyo/Osun Command are concerned, we don’t have such a case,” he added.