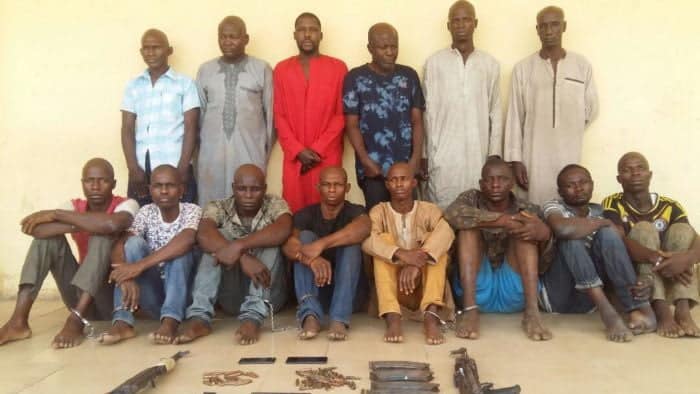 Suspects arrested by the police in the Nasarawa lecturer killing.

Fourteen notorious armed robbers suspected to be involved in the killing of a senior lecturer with the Nasarawa State University, Dr Ibrahim Mailafia, has on Wednesday been apprehended by the Nigerian police force.

Dr Mailafia, after the completion of his Doctorate Degree in Artificial Intelligence from the United Kingdom and while returning to the country, on his way to Kano on 3 November, 2017, to visit his family was attacked and murdered in cold blood on Kaduna-Zaria-Kano highway by robbers.

Jimoh Moshood, Police Public Relations Officer, while parading the suspect in Abuja said the Inspector General of Police, Ibrahim Idris, had directed a discreet investigation into the killing to bring perpetrators to justice.

“The IGP Intelligence Response Team (IRT) attached to Operation Absolute Sanity, working on actionable intelligence today, 23rd May 2018 arrested the suspects responsible for the killing of Dr Ibrahim Mailafia. They confessed to the killing of the said Doctor and also to have been terrorizing motorists and communities along Niger-Abuja and Kaduna-Zaria-Kano Highways.

“Recovered from their possession are Two (2) AK47 Rifles, One berretta Pistol and Two (2) phones, including the iPhone of late Dr. Mailafia. They admitted to the various criminal roles they played in the killing of Dr Ibrahim Mailafia and other violent crimes in the mentioned States. They will be charged to court on completion of the investigation,” he said.