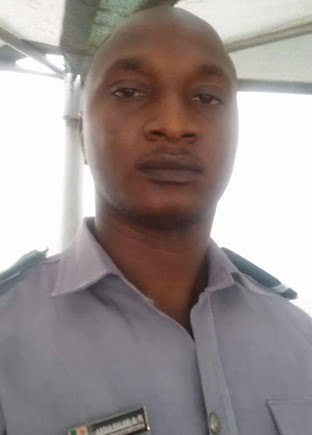 Brother Of Kidnapped Customs Staff, Cries Out At The Nigeria Customs Service’s To Find Him While Wife, Twin Sons Mourn.

The Family of Custom Assistant 11, Abdulsalam Rasheed who was declared missing six weeks back during botched operations, have cried out over lack of information and reportedly ‘lackadaisical attitude’ from the Nigeria Customs Service(NCS) since the incidence.

In  Waheed ( Brother of the Missing NCS Staff)’s account he said Rasheed had gone on an operation with his colleagues on April 14, 2018 and in the process of carrying out their official duty, they were attacked by smugglers around Lagos-Abeokuta expressway, shortly after the toll gate.

In his words, “My brother and his colleagues were attached to the Federal Operations Unit in Lagos. We were told that the team was attacked by smugglers during the operation. He was the one that drove the customs official Hilux car which was taken for the operation. In the process, the smugglers overwhelmed the officers and they had to run away. Because my brother was driving the vehicle, he was captured by the smugglers who had blocked the road and taken away “, Waheed said.

Waheed noted that several visits to the Federal Operations Unit, his brother’s office on Toyin street, Lagos has not yielded any result.

“They kept saying they are working on it, but information we got was that, top officials of customs refused to take action on the day of the incident.

“One of the team members told us that several calls made for reinforcement when they were being attacked went unheeded. Even when we visited their office, their lackadaisical attitude to the search for him clearly shows that they know more than what they are telling us”.

“People should help us ask the Customs Service when they began the search for him. It was several days after the incident and that was when we started making noise when he did not show up. That was when they formally reported to the police. They did not embark on a search immediately he got missing. Why should that be the case? Should they not be interested in locating their missing operative considering that he got missing while on official assignment? Was he deliberately set up by people in Customs? It is really very strange”.

According to the family of the missing Customs’ officer, the operation was embarked on due to intelligence that the smugglers would be operating that night. “How come they are finding it difficult to get further information about his whereabouts? Also, the Customs impounded a bus load of rice which was abandoned by the smugglers, why has it been difficult to trace owners of the vehicle, since it is a registered bus? The intelligence on the operation came from someone , so why has it been difficult to use the same channel to get information about what has become of our missing brother”.

Meanwhile, Wife of Waheed,  Basirat who is nursing six month old male twins and his aged mother have been inconsolable since the incident, according to Waheed. “My mother has not been sleeping. She kept asking for him. His twin sons have continued crying, especially at night. It is really strange”.

According to Waheed, seven people have been arrested in connection to the case, taken to court, but nearly all of them have been granted bail. What do they know that they are not telling us? he lamented.

The customs’ Comptroller General, the Inspector General of police should please help us as there seems to be a conspiracy on this matter”.