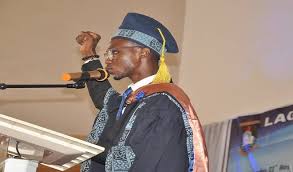 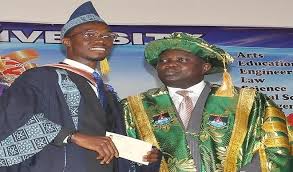 The best graduating student at the Lagos State University (LASU) in the 2016/ 2017 academic session, Mr. Ogunsanya Adetoro has stated that he failed his first WAEC/ NECO after facing some health challenges.

The 24-year-old who graduated with a Cumulative Grade Point Aggregate (CGPA) of 4.7 from the department of Business Administration explained he inherited cataract (an eye disease) from his father.

He said the health problem he had had a negative impact on his academics in secondary school, as the cataract spread from his first eye to the second.

“My Parents helped me to seek medical help but the first operation I had was not successful.

“When my first WAEC and NECO came out, it was dotted with F9s, so I left home and went to stay with my uncle and his wife.

“My uncle and his wife also helped me to seek medical treatment at the University College Hospital (UCH), Ibadan and the operation was successful,” he said.

Adetoro, said he went back to school to retake his WAEC and JAMB after he was treated, after sitting at home for three years.

“I was able to make four A’s and three B’s and scored 215 in JAMB to gain admission to LASU, Adetoro recalled.

According to him, he had applied for Accounting at LASU but opted for business administration because Accounting was not accredited at the time.

Adetoro noted that his academic journey was rigorous and herculean, even as he lost his father in 2015.

“But my doggedness and tenacity yielded a good result,” he added.

He urged employers to trust Nigerian graduates as “they have been fortified with the capacity to significantly change the corporate world.”

“We have internalized the new LASU mantra and will represent the institution in the outside world positively by being good ambassadors and providing solutions to societal problems,” said Adeotoro.

Adetoro lauded Gov. Akinwunmi Ambode for his investment and commitment to LASU.

The VC, also urged the students to be good ambassadors of the school and give back to their alma mater.

Fagbohun said the university graduated 29,710 students for the session, out of which 26 students made First Class division.