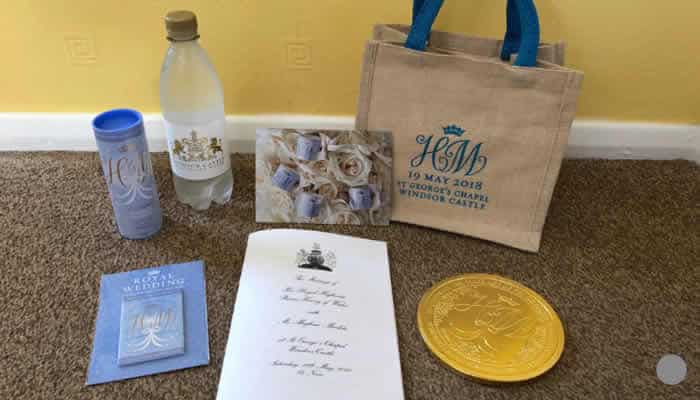 The royal wedding between Meghan Markle and Prince Harry, has seen one of the non-VIPs who attended the wedding, sell off the wedding souvenirs she got for 21,400 Euros (#10.2m).

Claire Oliver, who attended the wedding, was one of the 1,200 non-VIPs invited guest for the wedding which took place at St George’s Chapel.

Recall that Naija News reported that Prince Harry got wedded to Meghan Markle on Saturday at the St George’s Chapel.

Oliver, who is from Cambridge but lives in south-east London, works in human resources department of an engineering group heavily involved in offering apprenticeships to get more young people in work a cause close to Harry’s heart.

On the day of the wedding, she tweeted: “I got to watch the royal wedding right outside Windsor Castle in this amazing setting. Such an amazing day #Golden ticket #Royal connections” and filmed herself twirling with joy in the grounds.

But hours later, she had posted her free commemorative gift bag on eBay, which has now sold for £21,400.

The canvas bags inscribed with the couple’s initials contained a souvenir wedding order of service and welcome letter from Meghan and Harry.

Other freebies included a bottle of Windsor Castle water, a giant chocolate coin, a tin of shortbread and a voucher for 20 per cent off in the castle shop.

Speaking about her auction, Miss Oliver said she didn’t want to discuss it and she is among the more than 25 other guests who offered their bags to the highest bidder.

Some have reached more than £30,000, it emerged today, and eBay also has orders of service from Kate and William’s wedding day as well as cake from when Princess Diana married Prince Charles in 1981.