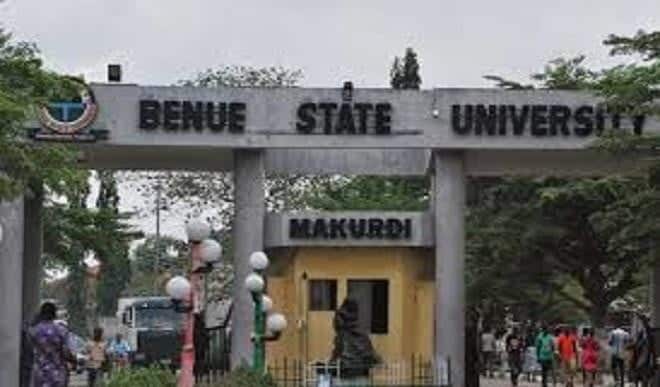 Some yet to be identified students parading as Benue State University Students in Markurdi  have reportedly shut down academic activities in the campus.

Punch reports that the students went on a protest after the university management introduced new conditional charges that resulted in an over 65 percent increase in school fees for new students.

The students allegedly blocked all the entrances leading to the university campus along the Makurdi/Gboko Federal Highway while they demanded that the university management reverse the decision without any delay to enable the new students carry out their necessary registration.

However, armed security personnel, comprising Police, civil defence and DSS were stationed at the main gates of the university, while some of them were seen chasing the protesting students out of the campus.

Confirming this  development in a statement, the Acting Registrar of the university, Mrs. Catherine Terlumun Bur, said that “some group of miscreants parading themselves as students of the university,” in the early hours of Monday 21st May 2018, took over, locked up and displaced the security manning the main gate of the university, bringing to a halt the inflow and outflow of human and vehicular traffic into the university, including nursery and primary school pupils “for reasons yet to be ascertained”.

Mrs. Bur noted that the action was particularly worrisome in view of the fact that the university was scheduled to commence accreditation of programmes by the National Universities Commission from Monday, May 21, 2018.

Mrs Buh also explained that the university was yet to conduct election into the leadership of the Student Union since the expiration of the tenure of the last executive committee hence it does not have any student union leadership currently to direct such a protest on campus.

The Acting Registrar warned the perpetrators to vacate the gate in their own interest, vowing that “it will not hesitate to avail itself of lawful means to deal with the situation.”

According to the statement, “University wishes to inform all bona fide students of this institution to go about their registration and other normal academic activities, as the first semester of the 2017/2018 academic session has commenced in earnest.

“For purposes of emphasis, management hereby reiterates its resolve to ensure that the timelines for registration and other activities are strictly observed.“