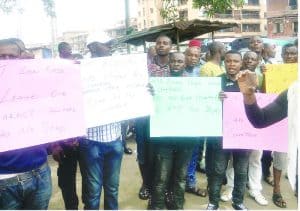 Protest in Anambra Over Suspension of Election ( Sun News)

Following the tenure elongation and the sudden cancellation of a scheduled election for new executives, traders at the popular electronics international market, Onitsha, Anambra State have revolted.

Sun news reports that, the traders last Friday shut down their businesses in the market and trooped to the Godwin Achebe Mini Stadium, Fegge, Onitsha, for the scheduled market union election.

Suddenly, news filtered in that the Anambra State Commissioner for Commerce, Trade and Wealth Creation, Dr. Christian Mmadubuko, had directed that the election should be suspended following pressure allegedly from some powerful persons in the state.

This was followed by a protest by the traders, who accused the expired market Leader, Mr. Emmanuel Ibeh, otherwise known as Lion Base, as the man behind the cancellation. They claimed that Ibeh was desperate to lead the market at all costs, after failing in three earlier chairmanship elections.

A crisis management move by the Izuchukwu Okoye-led outgoing executives of the market prevented a violent reaction from the traders over the cancellation, Naija News learnt.

The traders also alleged that Ibeh was acting the script in connivance with a Catholic priest who was a former chaplain to Governor Willie Obiano. They carried various placards with different inscriptions condemning Ibeh’s alleged action and marched along Zik’s Avenue, Fegge. The traders lamented the huge financial losses they incurred through the closure of the market over the election that eventually did not hold.

They said Ibeh was working to force a caretaker committee on the market, and vowed to resist any caretaker leadership. They demanded that the election should be given priority.

Ibeh however denied all the allegations against him by some of the traders. But right now, there are questions over whether the market leaders, whose tenure has elapsed, should continue to hold forth in managing the affairs of the market pending a proper election, or whether a neutral caretaker committee should be constituted to take charge of the affairs in the market.

Some of the stakeholders in the market, including Innocent Emenari, Albert Chukwubuike, Nicholas Okechukwu, Chukwubuike Kama and Damian Ogudike said most of the traders are opposed to the imposition of a caretaker leadership in the market. They called on the Catholic bishops of Awka and Onitsha to intervene in the matter.

The pressure against the institution of a caretaker committee has also led to the formation of a pressure group known as United People’s Front (UPF) in the market.

The group, has made it clear that they would never yield to the imposition of a caretaker committee in the market.

Chairman of UPF, Chijioke C. Nwobodo, an engineer, who spoke to news men vowed that the members of the UPF in the market, numbering over 600, and in concert with democratic forces, would resist the imposition of caretakers on the market.

This is also coming after another petition from the women’s wing of the market to Governor Obiano, denouncing any attempt to impose caretakers on the market.

In the petition, signed by Julie Ifeachor and Tina Ezisi, the women swore to fight those plotting to impose such an unelected leadership on the market at all cost. They threatened to go naked on the streets of Onitsha in protest.

Nwobodo, noted that there had been a series of transitions in the market without problems of this kind, and called on those behind the latest move to stop the trend.

He said the state government, through Mmadubuko, gave the market leadership the modalities for the election, which he claimed were followed. He wondered why the election was cancelled after it had been postponed on two occasions before the April 27 date was eventually picked.

“Before now, the commissioner had visited the market to ascertain the preparedness of the traders for the election, after which he confirmed that they were ready. He thereafter gave the go-ahead, it was learnt“, The UPF chairman said.

The commissioner, he said, had stopped the election on the ground that there were threats to him from people believed to be close to government and he was said to have agreed to constitute a caretaker committee.

Nwobodo, who was surrounded by the members of UPF however noted that caretaker government was not an option in a privately-owned market.

He urged the government and well-meaning people of the state to come to their rescue, warning that the gross injustice would be vehemently resisted.

Nwobodo said the traders had, in an emergency meeting at Godwin Achebe after the aborted election, adopted a motion that extended the tenure of the Izu Okoye-led executives by three months from April 27 to July 27 to enable them organise another election.

The group asked Governor Obiano to, as a beneficiary of free polls, not to be part of removing or obstructing democratic structures in Anambra markets.

In his reaction, Ibeh said the outgoing chairman of the market was just inciting some traders in the market, who might not know the actual issues, to attack him for no just cause. He alleged that Okoye was seeking re-election and contended that he was being persecuted for insisting that the right thing should be done at all times.

Presenting many documents to back up his claims, Ibeh said Okoye, whose tenure had expired, was not even a member of the market but was imposed on the traders by the president-general of traders in the state, Chief Okwudili Ezenwankwo.

Ibeh said that prior to the election that was cancelled, Okoye was aware that the election would not hold because the necessary steps were not followed. He accused Okoye of deceiving the traders and closing the market so that the traders would waste the whole day.

He also accused Okoye and his executives of being afraid of him (Ibeh), saying the executives had been fighting hard to ensure that did not contest.

“Izuchukwu Okoye, the chairman whose tenure has just expired, is not a member of the market. He has no membership card and shop. The shop he now stays was the one he got upstairs after he was declared winner of the election through the help of Okwudili. We have a constitution and due process must be followed in conducting elections.

You must give three months notice in conducting election but they did not follow it. They gave me a form to fill two days to the election and those in my line-up who are contesting were also given forms late, a week to the election.

“Those protesters you saw that day were Izuchukwu’s boys; no reasonable person was there with them. And they are doing that to attract sympathy. The question is now that his tenure has elapsed, what next? Does the constitution say he should stay after his tenure?

“They don’t want me to contest. Why are they pushing me away from contesting? If Izuchukwu says he is popular, why is he afraid of me,” Ibeh queried.

When Ezenwankwo was contacted for comments, he absolved the commissioner of commerce of having any hand in the election suspension.