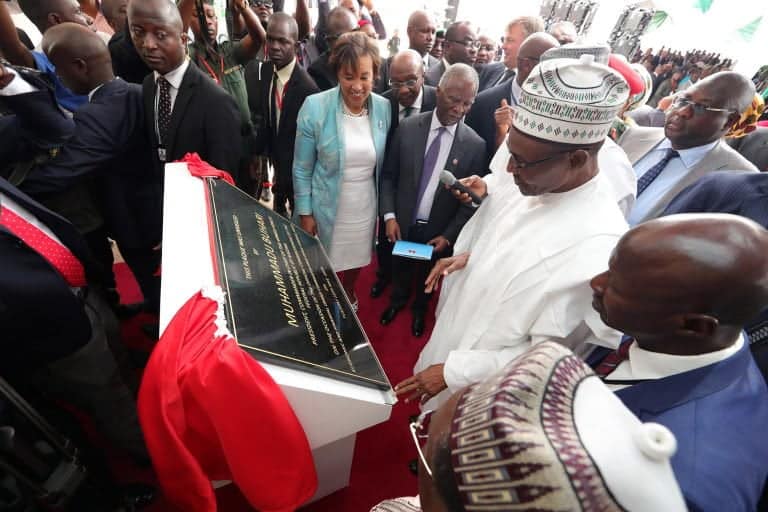 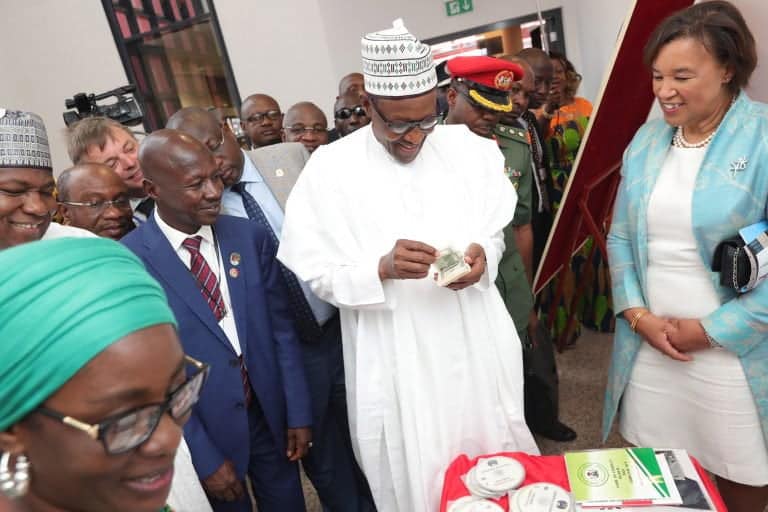 Buhari At The  Commissioning of The New EFCC Buildig. Photo Credits: thecable.ng

Buhari Calls For Support From Legislature And Judiciary In Fighting Corruption

President Muhammadu Buhari yesterday has declared that he will not bow to any form of pressure in his second attempt to fight corruption in Nigeria.

The President, who recounted how he was arrested and jailed for three years for fighting corruption, noted that corruption successfully defeated him at the first attempt.

Buhari was speaking at the commissioning the new headquarters of the Economic and Financial Crimes Commission (EFCC) in Abuja.

Buhari, whose military regime jailed several Second Republic politicians for corruption, was overthrown in a palace coup that brought the then Chief of Army Staff, General Ibrahim Babangida, to power. He was then placed under house arrest for several months.

In his words “My first attempt to fight corruption, corruption fought back successfully. I was detained for three years and only released after my mother died. In spite of that, my objective of fighting corruption remains steadfast.

“War on corruption is not an easy one to fight, because it affects so many different branches of our lives, so much that some people do not even consider breaking trust is anymore a crime. It has become the norm. That is why we must fight this attitude and encourage Nigerians to change their attitudes and perspectives.”

Buhari said throughout his journey in national service and since 2015, he had made a very conscious decision to pursue a vigorous fight against corruption in public life.

He, however, noted that the fight would not be successful without the support of the legislature and judiciary.

The President expressed hope and expectation that the judiciary, which is a critical stakeholder and partner in the war against corruption, would continue to collaborate with the executive to bring corrupt people to book.

He also called on the Legislature, which provides the legal framework for the anti-corruption war to support the determination of government to rid the nation of the brazen corruption witnessed in recent years, through a review of archaic provisions in the relevant laws.

“I call on the Judiciary and the National Assembly to join hands in this national effort,” he appealed.

The President said that since 2015, his administration had made significant progress in the fight against corruption.

He said anti corruption agencies “have recovered and are still recovering trillions of naira that were stolen in the past few years by people without conscience”.

Speaking further, Buhari said, “Everyone now knows that corrupt officials will be held to account, no matter how long it takes.

“We are pursuing recoveries everywhere and are making sure that anyone who has been found culpable is made to answer for his or her crime under the law.”

Buhari said the goal of his administration was to ensure the protection of public trust, adding that the anti-corruption war is at the centre of that goal.

Debunking claims of persecution, Buhari said “(We) never intended, and we are not engaged in witch-hunts, but we are determined within the laws to call people to account”.

Speaker of the House of Representatives, Hon. Yakubu Dogara, in his goodwill message at the ceremony, debunked the picture being painted that “Nigeria is fantastically corrupt” except President Buhari.

Dogara said that the President was not the only corrupt-free Nigerians, adding that there are millions of hardworking and committed citizens equally passionate about the anti-corruption drive.

“Mr. President is not alone in this, he is not the only corrupt-free Nigerian. There are millions of Nigerians who are not corrupt,” he said.

The speaker while commending the President and EFCC for the new headquarters, called for further training of staff and improvement in their welfare packages so as to shield them from “temptations”.

Earlier, the Acting Chairman of EFCC, Ibrahim Magu, said the building was both historic and a mark of legacy for generations to come.

Magu explained that in the fight against corruption, the increasing cost of economic crime made it inevitable to expand their scope of operations.

“What we have here today is a world class edifice that can stand side by side with the best in the world. The office complex is built to accommodate 700 staff with a fully equipped forensic laboratory and medical centre,” he explained.

Magu further said, “there is no hiding place for corrupt officials”, adding that the agency under his leadership has secured 486 convictions including that of a Senior Advocate of Nigeria (SAN).

He said the commission had also recovered over N500 billion with a promise to intensify the fight against corruption.