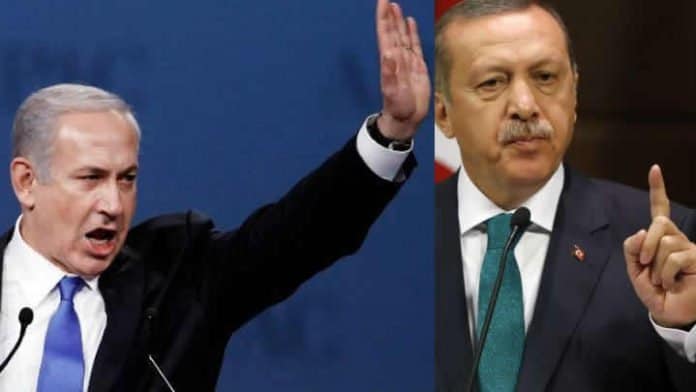 Turkey and Israel expelled each other’s envoys on Tuesday in an escalating diplomatic dispute over the killing by Israeli forces of 60 Palestinians during protests on the Gaza border.

The Turkish Foreign Ministry ordered Israeli Ambassador Eitan Naeh to leave the country for consultations for an undetermined period of time.

In response, Israel ordered the Turkish consul in Jerusalem, Husnu Gurcan Turkoglu, who is responsible for Turkey’s relations with the Palestinians, to return home for consultations. Turkey’s ambassador to Tel Aviv had already been recalled, as had Turkey’s ambassador in Washington.

In response to Israel expelling the Turkish envoy, Turkey summoned Israel’s consul general in Istanbul, Yossi Levi Safri, and also asked him to leave the country.

The Israeli ambassador was told that our envoy to Israel was called back for consultations, and was informed that it would be appropriate for him to go back to his country for some time,” a Turkish Foreign Ministry source said.

Hours later Israel’s Foreign Ministry said the Turkish Consul-General in Jerusalem had been summoned and told to return to Turkey “for consultations for a period of time.”

President Tayyip Erdogan, however described Monday’s bloodshed as the deadliest for Palestinians since the 2014 Gaza conflict, as genocide and called Israel a terrorist state.
Meanwhile, In a similar development, The Palestinian Authority has also  recalled its envoys to Romania, the Czech Republic, Hungary and Austria after their ambassadors attended an Israeli reception marking the US embassy’s move to Jerusalem.
The embassy move and Washington’s recognition of Jerusalem as the capital of Israel has deeply angered Palestinians, who see the Israeli-annexed eastern sector of the city as the capital of their future state.
The ministry “sees this participation as a grave breach of international law and United Nations resolutions which confirm that Jerusalem has been occupied since 1967 and ban countries from moving their embassies there,” the statement said.
“The recalls are to consult with our ambassadors to these states about their positions and their commitment to the EU’s positions.”