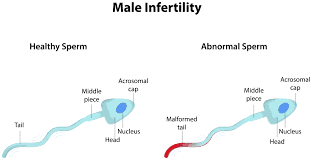 20% Cases of Infertility Are Found In Men.

A Consultant Gynecologist, Ibrahim Wada, based in Abuja has noted that at least 20 percent of infertility cases are found in men.

Wada today said this during an Open Day Educative Forum organised by Nisa Premiere Hospital in Abuja with the theme `Infertility and Quality of Life’.

He added that 30 to 40 percent cases of infertility were discovered in both men and women.

Wada said infertility is not just about being unable to conceive after series of unprotected sex but also the disability of an individual to contribute to the conceiving process.

“Some men can be infertile if they do not produce sperm at all which is referred to as Azoospermia, which means the complete absence of sperm cells in the semen samples.

“It is also possible for the man to produce sperm and still not have enough to contribute to conception, which means a low sperm count called Oligospermia.

“Oligospermia is when the sperm count is 15 million per millimetre of semen; this decreases the odds of one of the sperm cells fertilising the partner’s egg.

“The sperm must be normal and healthy; the morphology of a man’s sperm can be abnormal called Teratozoospermia, which means less than 40 per cent of sperm cells have a normal shape.

“The cause of this condition is often unknown; however, lifestyle choices such as smoking and exposure to toxins are risk factors,’’ he said.

He said that the sperm must be able to move speedily, stating that inability to do so, is a condition called Asthenospermia, which means the progressive motility of the sperm cells was less than 32 per cent and might not be able to reach and penetrate the partner’s eggs.

Other causes of infertility in men according to him include ejaculation issues, hormonal imbalance, erectile dysfunction, obesity, injuries to scrotum, emotional stress, exposure to heavy metals, radiations or chemicals.

The consultant further advised couples to firstly identify a fertility expert in order to get a diagnosis to determine the cause of infertility.

He listed treatment of infections, erectile restoration, hormone treatment, medications and surgeries as the treatments for infertility.