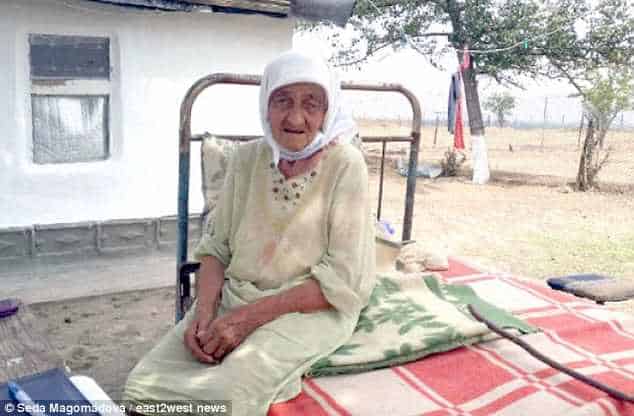 Woman To Be 129 Year Old Next Month

Report making rounds about a Russian woman who is 128 year old has is that her long life is nothing but a punishment from God.

The 128 year old woman who is identified as Koku Istambulova, from Chechnya, revealed that she has not had a single happy day in her entire life, and that she has no idea how she has managed to live this long.

“I have not had a single happy day in my life. I have always worked hard, digging in the garden. I am tired.

“Long life is not at all God’s gift for me — but a punishment,” she was quoted as saying.

“Looking back at my unhappy life, I wish I had died when I was young. I worked all my life.

“I did not have time for rest or entertainment. We were either digging the ground, or planting the watermelons.

“When I was working, my days were running one by one. And now, I am not living, I am just dragging through.”

Officials say all her documents were lost during the Second Chechen War from 1999 to 2009.

The pension fund, a state body, claims there are 37 people over 110 years of age in Russia yet all these claims, including Istambulova’s, are impossible to verify because of the lack of reliable birth or early childhood written records.

Most live, like Istambulova, in the Caucasus which has a history of longevity among its peoples.

Istambulova, who shuns meat but loves fermented milk, believes it simply is ‘God’s will’ that she will live to see 129th birthday next month.

The claim that Istambulova is about to turn 129 is made by the Russian Government, and is based on her national ID card, which shows her date of birth as June 1, 1889.

If correct, Istambulova was already 27 when the Russian Revolution unseated Tsar Nicholas II, 55, when the World War II ended; and 102 when the Soviet Union collapsed in 1991.

Asked how she lived so long, Istambulova told an interviewer: ‘It was God’s will. I did nothing to make it happen.’

Relatives say five years ago, she lost her only surviving daughter, Tamara, who died at the age of 104.

Istambulova is said to be articulate and able to feed herself and walk, but her eyesight is failing.