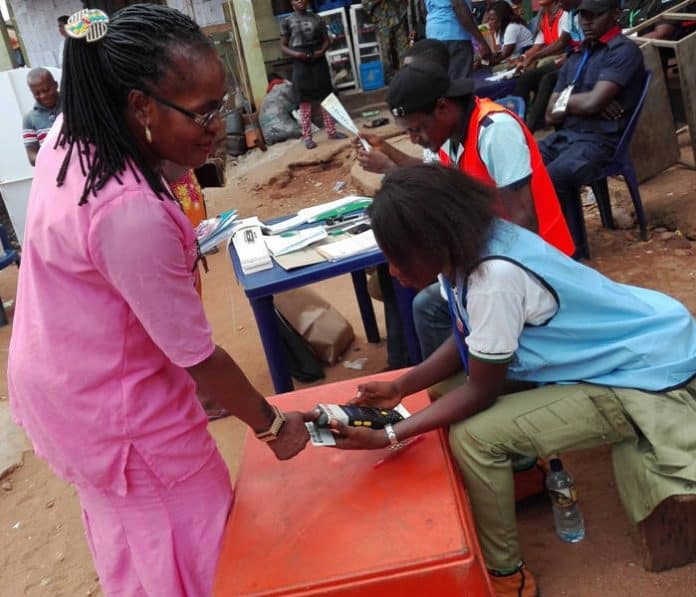 Voters Come Out In Trickles In Oyo( Photo File)

Oyo State Independent Electoral Commission (OYSIEC) Wait for Voters  To Turn Up Across The State, With Peoples Democratic Party  and Other Parties in Low Participation.

Oyo States Polling centres have recorded low turnouts in its accreditation and voting processes across that state as officials of the Oyo State Independent Electoral Commission (OYSIEC) were on ground , waiting for voters.
The News Agency of Nigeria (NAN) reports that the exercise is holding in the newly created units at 33 local governments and 35 Local Council Development Areas simultaneously.

NAN also reports that the Nigeria Police, Department of State Services (DSS) and Nigeria Security and Civil Defence Corp (NSCDC) were on stand by at polling units as well as strategic locations in the state.

Many residents also complied with the restriction order on vehicule movement although only few voters turned up for the exercise in which the opposition Peoples Democratic Party and several other parties are not participating.

Ward 8, Unit 13 polling Unit on Ring Road in Ibadan metropolis, recorded only four voters on the queue as at 10:24 a.m.

Furthermore, officials of OYSEIC arrived at 10:10 a.m at Ajeigbe area of Ring Road, Ibadan, where Ward 5, Unit 2 Polling Unit is located while accreditation and voting commenced at 10:45 am.
According to the Presiding Officer, Bukola Olawuyi, OYSEIC had provided enough voting materials to accommodate all registered voters.

“We will, however, not be making use of the card reader machines as they were not provided.

“Once your name is on the list and you possess a voter card, you are eligible to vote,” she said.
NAN, reportS that as at 11.a.m, election materials were yet to arrive at Ward 8, Units 5,6 and 7 Awaye/Osengere Polling Centre in Egbeda Local Government while no OYSIEC staff was sighted.

Intending voters were seen in groups discussing about the absence of the electoral officers.
A chieftain of the ruling All Progressives Party (APC) in the area, Folorunso Abioye, assured the voters that OYSIEC staff and materials would soon arrive.
While accreditation and voting were ongoing at Ward 2, PU 01, 02, 03, 04 in Egbeda Local Government Area, there was a low turnout, with only 70 voters having been accredited as at 11.20 a.m.
Oyo town also recorded  poor turnout of voters.  Basirat Hamzat, the Presiding Officer in Ward 9, Unit 3, Ojongbodu area, said,  “voters are coming in trickles.’’
She also confirmed the non-use of the card reading machines, adding that “Voters are free to vote immediately after they are accredited. ‘’
Meanwhile  OYSEIC officials were yet to arrive at Ward 6, Unit 2, Ajanpati, in Oyo as at 9:30 a,m.
Reacting to the low turnout, John Ajeigbe, the Chairman of OYSIEC, said the commission had done the necessary publicity for the election, insisting that voting would stop at 3 p.m.
He, however assured that  the exercise would be free, fair and credible.