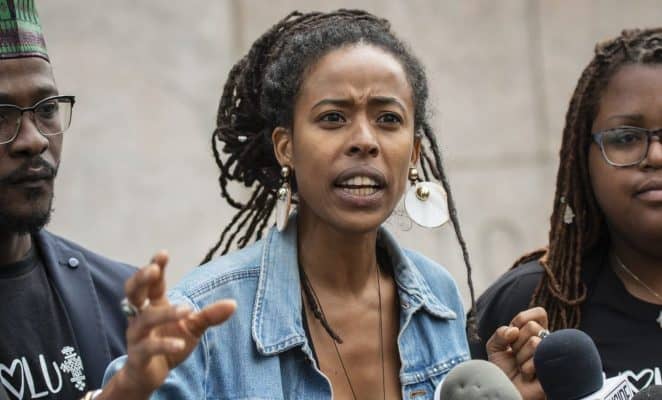 Bob Marley’s granddaughter, Donisha Prendergast, who is 33 years old, has been accused of burglary alongside her Nigerian born friend, Komi-Oluwa Olafimihan, by a white neighbour, who had called the police to report that they had broken into her neighbour’s house, when they moved out of the private apartment they had rented for the holiday.

The police detained the ladies as they were leaving the Airbnb rental in April and there after the ladies requested for apology from the police after their innocence was confirmed.

Airbnb is an American company which operates an online marketplace and hospitality service for people to lease or rent short-term lodging.

“We want more than an apology, we want change,” Donisha Prendergast, a filmmaker, said on Thursday (today).

“The neighbour was wrong for racial profiling, and the police were wrong for responding with the protocol they used. Isn’t it innocent until proven guilty? That’s not how things proceeded.”

Prendergast, 33, and her two friends, Kelly Fyffe Marshall and Komi-Oluwa Olafimihan, all of whom are Black, said they were leaving the Airbnb rental in Rialto, California on April 30 when a white neighbour called 911 and told police that the place was being robbed.

Prendergast, whose mother is the eldest daughter of the iconic reggae singer, said the situation could have ended much worse.

“Just because we’re alive to tell the story doesn’t mean that everything is all right,” Prendergast said. “Individuals have to be held accountable. And we want a review so the police do not perpetuate an individual’s racism with their policies.”

Airbnb host, Marie Rodriguez, said her neighbour called police because she didn’t know the home had been rented.

“They’re latching on to this whole racism thing because they’re black,” Rodriguez said. “This is a diverse neighbourhood.”

Prendergast’s attorney, Benjamin Crump, said the white woman who made the 911 call specifically reported that three Black people appeared to be burglarising her neighbour’s house because they were loading suitcases into a car and did not smile or wave at her when she allegedly waved at them

He also faulted the policemen for accusing Prendergast and her friends of fabricating their online Airbnb confirmation and having someone pose as their host on the phone.

Rialto Police Chief Mark Kling said his department was unfairly accused of racial bias over the 22-minute encounter. He said the group of friends was never cuffed or seated on the curb.

“I am confident that our officers that were involved in this situation handled the call for service with dignity, respect and the utmost professionalism,” Kling said.