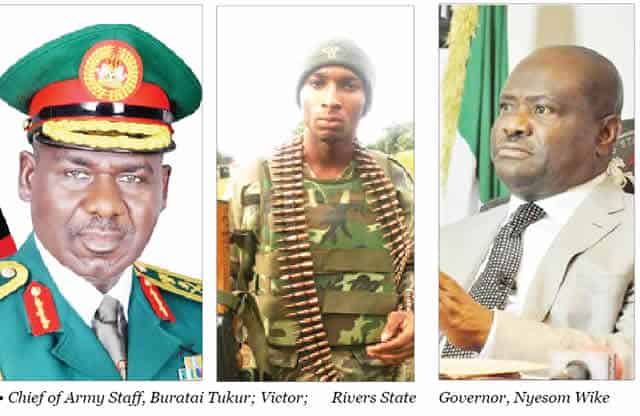 An ex-soldier, Victor Ochoma, has been alleged to have been tortured to death by some military operatives attached to a construction company in Ahoada East Local Government Area of Rivers State.

Report has it that Victor, who is 25 years old left the army in 2014 after joining a special squad to fight members of Boko Haram in Maiduguri, Borno State.

The ex-soldier was alleged to have left the millitary due to lack of weapons to fight the insurgents and there after he got employed in a road construction firm on Ihugbogo Road as a security guard.

It was learnt that the firm had a contract with the state government to construct Ahoada, Odiemerenyi, Odieke and Ihugbogo roads, all in the Ahoada East LGA of the state.

In ensuring the security of the workers of the construction firm, some soldiers attached to the Ahoada command were reportedly deployed to the company.

On Sunday it was gathered that, a man was caught with an iron rod allegedly stolen from the company and the suspect confessed that the rod was sold to him by one of the company’s guards which led to Victor been seized.

He was reportedly taken to the military base at Ahoada, where he was tortured to death, Punch learnt that his corpse was dumped at a general hospital by the soldiers, who there after returned to their base.

Neville Ochoma, Victor’s half-brother, who saw him before he breathed his last, said he bled from the nostrils and mouth.

He said the ex-military man denied the allegation of selling the rod valued at N1,600, to the suspect.

Neville said, “He started working with the company in January 2018. We were formerly living together in Ahoada. When he got the job of a security man at the company, he moved to Ihugbogo, where the company has its office.

“A man was caught with an iron rod and he said it was sold to him by a security guard. Victor was questioned, but he denied selling the rod. Other security guards on the premises fled.

“They took him to their base and tortured him from Sunday night till the early hours of Monday.

“By morning, they took him to the Ahoada Police Station. The police rejected him because of his condition. They told the soldiers to first take him to a hospital for treatment.

“Instead of taking him to a hospital, they took him to their command at Ahoada. They beat up the man they found the rod with as well, but Victor’s torture was much because he was an ex-military man.”

He explained that the soldiers continued with the torture at the command and when some family members visited around 11am, the commandant denied access to him.

He said after waiting for two hours, they were called in.

“We met him vomiting blood in the mouth and nostrils. He had suffered internal bleeding.

“When they saw that his condition was critical, they brought their van and took him to the Ahoada General Hospital. Before we got to the hospital, he was dead. They left his corpse at the hospital, put their van in reverse and left,” he added.

Neville said when the family went to the Ahoada Police Division to report the case, they were turned back because the Divisional Police Officer was not around.

The Divisional Crime Officer was alleged to have also rejected the case. He noted that when he returned to the army base to meet the commandant, he was chased away.

“The rate of torture at the base was scary. There were some other people being tortured when I got there with another relative,” he added.

He said the late Victor quit the army after surviving three attempts on his life in Maiduguri.

He said, “He left the army after serving for two years because of the way the commanders were toying with the lives of the southerners, who were sent into uncharted forests. Those who knew the forests were assigned to roadblocks. He also said they were given unsophisticated weapons to fight Boko Haram.

“He survived being killed three times and even had a bullet injury. The last time he escaped, a barracks was burnt down.

“When he came back, he returned to his life as a civilian. He was murdered because they said he was a deserter. Our father is dead,” he added.

Johnson Nwocha, an uncle of the victim, said the family was still deliberating on what to do about the incident.

He claimed that Victor’s torture by four soldiers started on the construction company’s premises before he was dragged into a van and taken to the place where he was beaten to death.

“The family eventually reported the case to the police,” he added.

Edith Ochoma, the victim’s mother, called for the arrest and prosecution of the soldiers responsible for her son’s death.

“The boy was innocent. He cannot die just like that,” she said.

Nnamdi Omoni, the state Police Public Relations Officer, said the case was not handled by the police.

He said, “I am aware of the matter, but I cannot comment on it because it does not have anything to do with the police. You know the appropriate quarters to contact; I have nothing to say.”