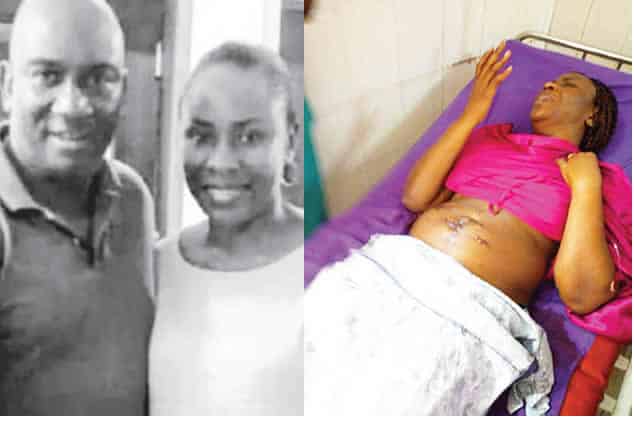 A Lagos lawyer, Udeme Odibi, who allegedly killed her husband, who happens to be a lawyer also, Otike Odibi, at their home on Diamond Estate, Sangotedo, Ajah has been remanded by a chief Magistrate’s Court sitting in Yaba on Wednesday.

Mrs. Kikelomo Ayeye, the Chief Magistrate, said she should be remanded in prison pending legal advice from the Directorate of Public Prosecutions.

Recall that Naija News had earlier reported on Thursday that a Lagos lawyer allegedly stabbed her husband with a knife, there after cutting off his private part and trying to commit suicide.

The suspect was however, rescued from the attack and was admitted to a hospital.

The deceased was reported to have called a neighbour, his younger sister and his mother on the telephone on Wednesday, informing them of the threat to his life.

Further information has it that the relationship between the two did not produce any child and was fraught with domestic violence. The 48-year-old was arraigned on one count of murder.

The charge read, “That you, Udeme Otike Odibi, on or about May 3, 2018, on Diamond Estate, Sangotedo, Lagos, in the Lagos State Magisterial District, did unlawfully kill your husband, one Otike Odibi, thereby committing an offence punishable under Section 223 of the Criminal Law of Lagos State, 2011 as amended“.

Her plea was not taken by the court.

CSP Effiong Asuquo, the Officer-in-Charge of the Legal Department of the State Criminal Investigation and Intelligence Department, prayed the court to remand the accused in prison for the next 30 days.

He said the case file had been duplicated and sent to the DPP for legal advice.

The counsel for the accused, Oluseye Bamijoko, however, asked the court to remand the accused at the Ikoyi Prison instead of the Kirikiri Prison to allow neurologists and endocrinologists attend to her thyroid disease.

Bamijoko told the court that the accused was undergoing psychiatric and private evaluation.

He pleaded that his client should be remanded at the Ikoyi Prison since the specialists attending to her were in the Ikoyi/Victoria Island area.

But the Chief Magistrate, Ayeye, rejected the request of the counsel and ordered the remand of the accused in Kirikiri Prison.

She ruled that since Ikoyi prison did not have facilities for female inmates, the accused should be remanded in Kirikiri.

“Being at Kirikiri does not stop the specialists and endocrinologists from visiting and it is sad that the Ikoyi Prison lacks facilities for the female gender,’’ Ayeye said.

She, however, ordered that the accused be given privacy when interacting with her counsel or family members.

The chief magistrate also said the burial of the deceased, which was scheduled to hold on Thursday, should be suspended until investigations were completed.

She adjourned the case till June 25 for mention.