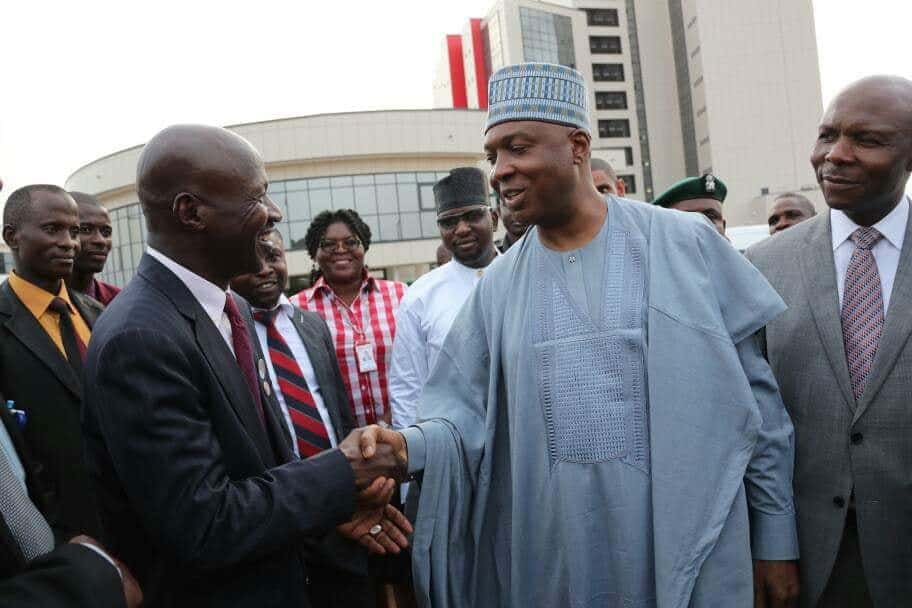 The Senate President, Bukola Saraki says all effort must be directed towards fighting corruption, before the society can be built.

Saraki said this while visiting the new headquarters building of the Economic and Financial Crimes Commission (EFCC).

He assured that he would continue to put his hands on deck, so as to build and strengthen the nation’s institution irrespective of any differences.

While speaking with journalists, Saraki said he was particularly impressed by the quality of work done and the fact that the building was designed by a Nigerian architect.

He said that the nation must continue to build institutions as well as strengthen existing ones to realize its dream of becoming a great democratic country.

On the importance of his visit to the project site, Saraki said: “I think the most important thing as far as we are concerned is that I have always said that we must always continue to build institutions and that is what is important and we must continue to support in building these institutions.

“If we are going to build a better society in our country, one of the main things we must tackle is the issue of corruption and how we can do that is by strengthening these institutions.

“My presence here is to say that whatever we do in our job, the most important thing is that we all represent institutions and we must work and see that it is in the interest of the country.

“So my presence here is, after a building like this where the National Assembly has played a great role, it must be my responsibility to see how the money was spent and I can see that that has been done properly and we should continue to work together to see that that goes well for the entire country.

“If you look at most projects in Abuja, I don’t think any project like this has been well-funded and that shows that despite all the noise you will hear, the National Assembly has supported where it matters because this is where it matters and I think we have done that.

“If you look at what has been achieved in the last two and half years in putting this building up and bringing it to completion, I think it is a remarkable achievement,” he said.

“We might disagree on what those right things are but at the end of the, we must ensure that we build institutions, we support institutions and do what is right and we must continue to do that.

“Unfortunately, I will not be here on Tuesday because I will be sitting and that is why I said I must come and see it. A project as huge as this that the National Assembly has supported is worth seeing.”

He said the fight against corruption must continue till there is victory.

“I think we have all said it. Corruption is something we must fight,” he said. “There is no way you can build a society without fighting corruption.”

He said he was impressed by the fact that the building was designed by an indigenous architect.

He said: “I must say that I am very impressed. Very commendable structure, I like the fact that the architect is local; Nigerian and the quality of work done by Julius Berger is very impressive and it is a building that we should be proud of.

“The details and planning is very commendable. I would commend all those who have worked towards the actualization of the structure.

“From those who started it to the builder. Let me also commend members of the National Assembly that provided the funding to make it a reality. I am very impressed. It is well kept secret but it is very good.

On what the completion of the building means for continuity in governance for the country, he said: “That is why I keep saying it is not about individuals, it is about institutions and this is what we have shown here.

“I think the project has gone through about three Executive Chairmen and one did not come in to say this is not my project and I must not continue. Each one has taken it as his own project.

“I think that is good and that is the whole point that is important and this is something we will be proud of for many years.

“In many years to come, I hope that we don’t have corruption in an environment like this but for now, I think there are many good aspects of this.

“Having a Nigerian that designed this, the details are very impressive – the clinic and all the facilities – and the fact that it has gone through three different administrations; and the fact that the National Assembly has played its role and brought it to completion, I think that it is a lot of plus,” he stated.