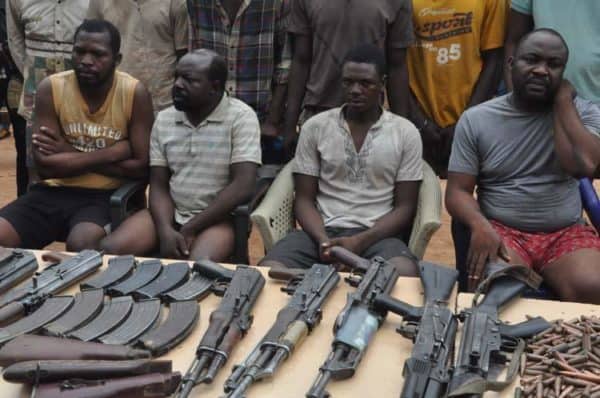 The Nigerian Police has revealed that it has busted gang of robbers and kidnappers, two gun running and arms dealing ring in the Benue-Taraba axis, making 11 arrests.

Miracle Emmanuel, a 27 year-old gun dealer from Anambra, based in Takum, Taraba state was arrested alsong side his three-man gang, the police found five Ak-47 rifles, along with other ammunitions.

A total 10 AK 47 rifles and two Beretta pistols from the 11 suspects were recovered by the police as the suspects were arrested today at the Benue police headquarters in Makurdi and claimed the arrests were a major breakthrough in stopping the incessant killing of innocent people in the Middle Belt states of Benue, Taraba and Nasarawa.

Morris Ashwe, 36 years old from Mbajima Village Katsina Ala LGA who was accused of supplying arms to the wanted criminal kingpin, Terwase Akwaza a.k.a Ghana as the sole armourer was also arrested.

According to the Spokesman of the Nigerian police, Ashwe was in possession of five AK 47 rifles, 238 AK47 bullets, 40 Smoke Grenade Canisters and 79 LAR Rifle bullets.

The busted gun dealing gang in Taraba state include Kabiru Idris who resides in Takum, 43, Miracle Emmanuel who hails from Anambra state, said to be a principal suspect and gang leader. Also arrested was Husseini Safiyanu, from Taraba.

The Jimoh Moshood disclosed that a seven-man robbery and kidnapping gang was arrested in Benue, along with two Beretta pistols. The gang was on its way to kidnap a prominent person in Makurdi, the state capital.

“The renewed strategies adopted by the Nigeria Police Force to stop the incessant killings of innocent Nigerians and curtail the proliferation of firearms across the country, most especially in the North-Central States have been yielding positive results”, the police spokesman said.

“The IGP Intelligence Response Team and the Police Special Forces mandated by the IGP to work with Benue, Nasarawa and Taraba State Commands, in the last two weeks arrested the 11 suspects mentioned above within Benue and Taraba States and recovered from them were Ten (10) AK47 Rifles and other assorted firearms and ammunition.

” In the first two cases, the suspects confessed to have been responsible for supply of AK47 rifles and other firearms and ammunition to armed bandits, militias, and criminal herdsmen/farmers in Benue and Taraba States.

” The first suspect, Morris Ashwe confessed and admitted to have been supplying firearms and ammunition to the notorious and most wanted vicious and notorious gang leader of militia, murderers and kidnappers Terwase Akwaza aka Ghana.” Jimoh said.

The police said the gangsters have admitted to have been responsible for several kidnappings in Benue, Taraba and Some part of Nasarawa State in the recent past.

“Investigation is being strengthened to arrest other suspects at large. All suspects will be arraigned in court on completion of investigation.

” The deployment of additional 15 Police mobile Force units to augment the strength of the Benue State Police Command has beefed-up security in the State and help in sustaining the peace that have been restored to the state”, Moshood said.

According to NAN, Akwaza was declared wanted by the Nigeria Police Force last year March over the killings of many innocent persons at Zaki Biam and the wanton destruction of properties worth Millions of Naira.