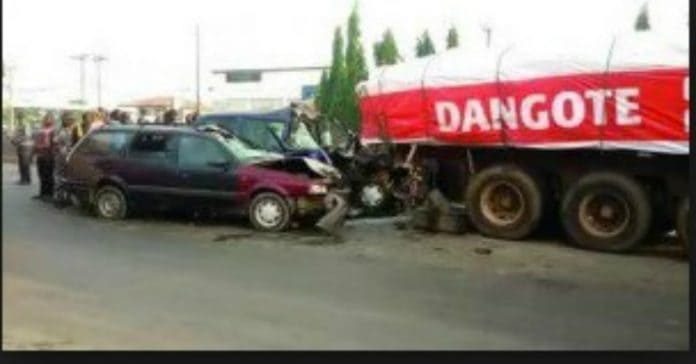 A fatal road accident involving a Dangote truck and a Honda car which occurred today, has claimed the life of one and also injured two persons.

Mr Babatunde Akinbiyi, the Public Relations Officer of the Ogun Traffic Compliance and Enforcement Corps (TRACE), who confirmed the accident said the accident happened today at about 9:30 am at Olorunpodo axis of the Sagamu-Benin Expressway in Ogun.

He said the car with registration number CW 23 ENU was hit by the truck from behind and the driver thereafter fled.

“According to an eye witness, the Honda car with three occupants and coming from Ijebu-Ode was hit by a Dangote truck and the truck driver ran away.

“One person died in the accident while two others were injured and they were all males, “  he said.

The TRACE spokesman said the injured have been taken to Hope Hospital in J4 area of Ijebu-Ode while the dead was deposited at Ijebu-Ode General Hospital.

He added that the car had been taken to Ogbere Police Area Command.